The 1948 film The Fallen Idol, directed by Carol Reed, is a film of watching and being watched, of seeing and not seeing, of incomplete knowledge and lies and misunderstanding. It begins with the very first shot: a close-up on a young boy (Bobby Henrey), his face framed by a balustrade, as he gazes down at the brisk comings and goings of the numerous adults far below him, on the ground floor of his house. His house, as it happens, is an embassy in London, and most or possibly all of this bustle is due to the fact the ambassador (Gerard Heinz) — his father — is about to depart on a brief trip in order to bring the boy’s mother home from an eight-month-long hospital stay. Servants race to bring the ambassador’s bags out to his car; last-minute changes are made to the travel arrangements; preparations for the woman’s homecoming are discussed. Even when the boy, Phillipe (often called Phile, pronounced with a short i), descends the stairs partway in order to get a closer view, nobody appears to take the slightest notice of him save for one man: Baines (Ralph Richardson), the butler. Despite being occupied himself, Baines makes a point of acknowledging and entertaining the little onlooker. A playful hop when he empties an ashtray into the fireplace, a wink — small things, maybe, but enough to make Phile smile and to suggest the warm friendship between the two. It’s Baines, too, who says, “Master Phillipe, sir,” as the ambassador is leaving, as if to remind him to bid farewell to his son. One gets the sense that he might well have forgotten otherwise.

At the risk of overgeneralizing, it seems reasonably safe to say that any television series that features a metal plate in a woman’s head and a preteen boy’s tattoo in its opening credits, presenting them as equals with the rest of the show’s main characters, is bound to be at least a tad offbeat — and that’s not even accounting for the fact that the two of those other main characters are brothers with the same first name.

Welcome to the weird and wonderful world of The Adventures of Pete & Pete.

END_OF_DOCUMENT_TOKEN_TO_BE_REPLACED

In the midst of writing a post on two of Ozu’s silent films, I looked up Mikio Naruse’s filmography on Wikipedia and was reminded that his silents, in particular, are a goldmine of delightful and intriguing titles (at least in English). What a shame that practically all of them are lost, though I do have to wonder if Fickleness Gets on the Train or The Scenery of Tokyo with Cake could ever live up to my expectations.

If the cast list on IMDb is to be believed, Marcello Pagliero’s 1950 film Un homme marche dans la ville features an appearance by Pierre Léaud, the film’s assistant director and the father of Jean-Pierre Léaud, as “l’ordonnateur.” While the term has several possible meanings, the only one that appears to fit here is “the undertaker,” which would presumably make Léaud père the small man with the mustache and glasses in the scene linked above (starting around the 1:11:45 mark). Perhaps it’s just a kind of confirmation bias, but some of those mannerisms do look familiar…

For Satyajit Ray on his 100th birthday, with love and spoilers

There’s a subtle yet particularly cruel visual touch at the end of Satyajit Ray’s short feature The Coward (Kapurush), an added sting in an already cruel scenario. A man sits on a bench at a train station for hours, hoping against hope that his now-married ex-girlfriend, encountered by chance years after he disappointed her when she needed him most, will leave her husband and run away with him. Darkness falls; he nods off. Awoken by the whistle of a train, he’s startled and then delighted to see the woman standing beside him — until he discovers that she simply wants to retrieve the sleeping pills that he had borrowed while staying at her house. “Let me have them, darling,” she says. That “darling,” whether sincere or sardonic, is a devastating touch in its own right, as is the way she vanishes into the blackness of the night when she walks away from him a moment later, her pills recovered. Any viewer is able and apt to appreciate these details, but it takes a familiarity with certain other Ray works to grasp the full significance of a brief shot that falls between them: a close-up of the woman’s extended hand as she waits for the man to turn over the bottle.

END_OF_DOCUMENT_TOKEN_TO_BE_REPLACED

“Am I young for a father?” Dino Versini (Walter Chiari) asks his girlfriend, Elsa (Michèle Mercier), in the opening scene of Dino Risi’s 1964 film The Thursday (originally Il giovedì). Dino is forty and looks it, so the inquiry seems more than a little silly. Is it simple vanity that compels him to pose this question, a barely veiled attempt to elicit a compliment on his appearance, or does it spring from a deeper insecurity? It’s just possible, also, that at least some part of him genuinely regards himself as someone too youthful to be the parent of an eight-year-old-boy. Today, for the first time since his marriage broke up five years ago, he’s going to spend time with his son, Robertino (Roberto Ciccolini). Although he may not realize it yet, their reunion will force him to confront both his image of himself and the image he tries to project to the world — whatever difference there may be between them.

END_OF_DOCUMENT_TOKEN_TO_BE_REPLACED

“There have been many, too many, deaths around me, of people I’ve loved, that I took the decision, after Françoise Dorléac died, never again to attend a funeral, which, as you can well imagine, does not prevent the distress I feel from casting its shadow over everything for a time and never completely fading, even as the years pass, for we live not only with the living but also with all of those who have ever meant anything in our lives.”

END_OF_DOCUMENT_TOKEN_TO_BE_REPLACED

Thanks to the Portail des bibliothèques municipales spécialisées, I came across this picture I couldn’t resist sharing: a not-yet-two-years-old Jean-Pierre Léaud with his mother, actress Jacqueline Pierreux, from the April 16, 1946 issue of Pour tous magazine. (And it’s part of the Bibliothèque du Cinéma François Truffaut, fittingly enough.) It’s definitely a resource worth checking out, and I’m looking forward to exploring it further. 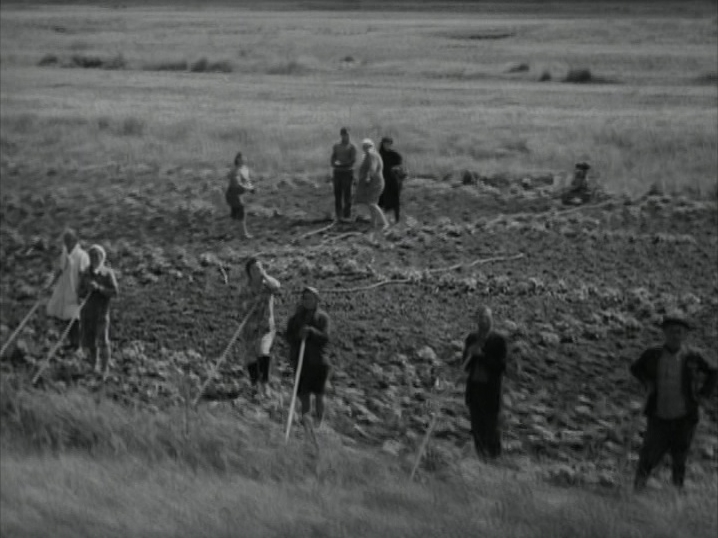 At one point in Otar Iosseliani’s Pastorale (1975), a train trundles through the Georgian countryside in which the film takes place, announcing its approach with a low blast of its horn that almost immediately gives way to a song sung in the nation’s traditional polyphonic style. Though it’s mixed with the rattling of the locomotive, the music appears to be non-diegetic; there’s no obvious sign of singing among the laborers in the fields who pause in their work to watch the train go by, who stand all but motionless while they stare at the passengers staring back at them. Could it be, perhaps, that this music is what the agrarian scenery evokes in the minds of the more urban-looking passengers?