Kanji Watanabe (Takashi Shimura) is an unlikely hero. A perpetually hunched over, unremarkable man in late middle age, he’s spent the past thirty years working in civil service and is now the section chief of the Department of Public Affairs. His job — which appears to consist of little more than stamping documents and directing citizens to other departments so that he doesn’t have to deal with their concerns — is one of meaningless busyness, accomplishing nothing of significance to himself or to anyone else. “He might as well be a corpse,” says the rather contemptuous narrator of Akira Kurosawa’s 1952 film Ikiru. In fact, before introducing Watanabe himself, the narrator introduces something more interesting: an x-ray of his stomach. Although he doesn’t know it yet, he has cancer, and in all likelihood he’ll be dead within a year.

This must sound like a grim premise for a film, and indeed, a devastated Watanabe is unable to cope with the bad news at first, especially when he realizes how much time he’s wasted. “I can’t bring myself to die,” he tells a writer (Yûnosuke Itô) whom he meets one evening. “I don’t know what I’ve been doing with my life all these years.” With the writer as his guide, he proceeds to spend a hedonistic night indulging in the sorts of pleasures he’s long denied himself, including pachinko, alcohol and women — a welcome change, but a great strain on his feeble body. 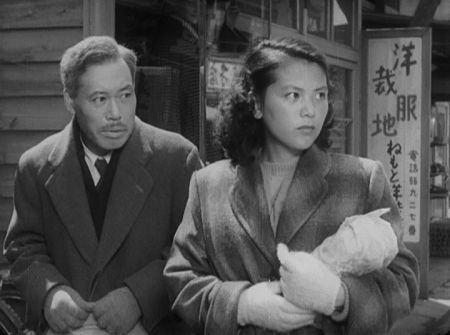 Next, he stumbles into a friendship with Toyo Odagiri (Miki Odagiri), a young woman from his department who has just resigned after a year and a half there, unable to bear the boredom any longer. She seems so vivacious to him that he believes she holds the secret to leading a rich, full life. Desperate to figure out what it is, he latches on to her, until she begins to find him both annoying and unsettling. “All I do is work and eat,” she insists. A moment later, though, she offers a suggestion: “Why don’t you make something?” It sounds reasonable enough, but Watanabe can’t imagine what he could possibly make in his office — until he remembers a group of mothers who recently came to City Hall, petitioning the government to turn their neighborhood cesspool into a park. At the time, he had no interest in solving their problem and sent them off to Engineering without a thought; as Engineering and every other department treated them in much the same fashion, their visit proved a total waste. Now, with his outlook on life radically altered, he becomes determined to make their dream a reality in the few months remaining to him.

Of course, the danger with inspirational stories is their tendency toward schmaltz and sappiness, but Ikiru avoids these pitfalls. Odd as it may sound, one of the things I’ve always loved most about it is the cynical edge to its idealism. Watanabe’s cancer isn’t miraculously cured; he never manages to repair his damaged relationship with his son, Mitsuo (Nobuo Kaneko); he doesn’t even receive the credit he deserves for spearheading the park project. Quick as his colleagues are to turn away challenging work, they’re just as quick to point out their own relatively minor contributions to the finished job and downplay Watanabe’s extraordinary efforts. The mothers, at least, know what he did and are grateful to him. Will any of them remember his name five, ten, twenty years down the road? Probably not. In the end, it doesn’t matter. The people left behind can quibble and question his motives and the role he played, but he found a way to do a little bit of lasting good — and Kurosawa, in Ikiru, created a beautiful, moving and thought-provoking film. 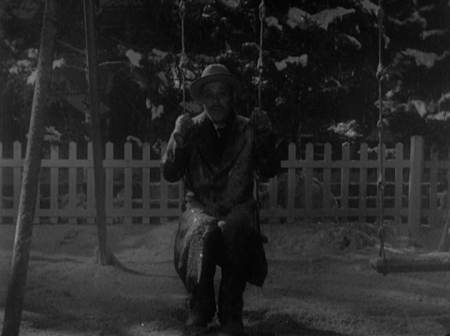 “Misfortune teaches us the truth,” the writer says upon hearing about Watanabe’s illness. The lessons Ikiru offers are simple, so much so that they might qualify as cliches. I wouldn’t say it’s ever taught me anything new, really; rather, it reminds me of things I already know, things that are, nonetheless, easy to forget in the mundane course of day-to-day life. It’s a film about the determination and courage it takes to achieve a goal, about the ways we misjudge people, about recognizing the advantages and opportunities we have, about making the best possible use of our brief time on earth — not to mention life, death, love and countless other topics of universal relevance.

After Watanabe’s death, when his fellow bureaucrats have finally pieced together the story of his final months, it comes as a kind of revelation to them. Recognizing both their own mortality and their essential uselessness, they collectively (and drunkenly) vow to change. “Don’t forget this feeling,” one of them says. They do. Before long, they’re back at their desks at City Hall, and everything is just as it always was. Even Kimura (Shin’ichi Himori), Watanabe’s most ardent defender, finds himself unable or unwilling to fight the status quo, his attempt to protest thwarted by a stern look from his supervisor. He hasn’t forgotten the feeling, but will he act on what he’s learned before it’s too late? That’s Kurosawa’s challenge to us all.

This post is part of the Things I Learned from the Movies blogathon, hosted by Speakeasy and Silver Screenings. Click the banner above to see all of the other great posts.