When Adrien Dufourquet (Jean-Paul Belmondo) arrives in Paris at the start of the 1964 film That Man from Rio, he’s looking forward to all the fun he’ll have there during his week’s leave from the military — but fate has other plans for him.

That same day, a small earthenware statue is stolen from the city’s Musée de l’Homme. Although there’s some question as to why the thief went after this particular piece and ignored the more valuable items all around it, Professor Norbert Catalan (Jean Servais) thinks he has the answer. He explains that the statue is a relic of the long-lost Maltek people of South America, decimated by Europeans centuries ago, and that he and two colleagues found a trio of these figurines during an Amazonian expedition three years earlier. His was the one taken from the museum; a second belongs to Mario De Castro (Adolfo Celi), the expedition’s wealthy Brazilian backer; and the third’s whereabouts are unknown, as its owner, a man named Villermosa, was killed by a poisoned arrow. A museum guard met a similar fate during the robbery, leading Catalan to suspect that the Malteks — specialists in poisons and hypnosis — are behind it, in spite of the fact that the entire civilization was believed to have been wiped out.

As Catalan leaves the museum, a mysterious figure in a trenchcoat and hat forces him into a car. Soon, a second victim is kidnapped: Agnès (Françoise Dorléac), Villermosa’s daughter and the only person who knows where he hid his statue before he died. She also happens to be Adrien’s girlfriend, and he witnesses her abduction while visiting her at her home. Instantly, he jumps out the window, hops on a motorcycle and sets off to rescue her — a quest that ends up taking him halfway around the world, to Rio de Janeiro, Brasilia and even the Amazon rainforest.

In 1962, director Philippe de Broca and star Jean-Paul Belmondo collaborated on an eighteenth-century swashbuckler called Cartouche. While That Man from Rio, their next project together, is set in the 1960s, it might be described as a swashbuckler in spirit. (It’s also been described as a spy spoof, an idea reinforced by several of the film’s posters, which depict Adrien in the white dinner jacket and black tie he wears during a party at De Castro’s house. However, with its relics and its lost civilization, it feels a bit closer to Indiana Jones than to James Bond.) Again and again, Adrien has to use quick thinking and physicality to rescue Agnès and fight off or evade the men behind her kidnapping: he flies a plane, swims under a motorboat, jumps out of a moving car, swings on a vine, walks across a narrow beam high atop a construction site. (Belmondo reportedly did his own stunts, adding to the excitement. The location shooting is a major asset as well.) 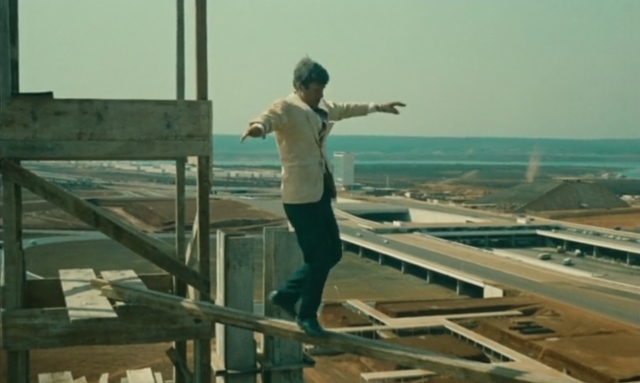 He’s not just worried about the film’s villains either. If he doesn’t get back to France before his leave is over, he’ll be regarded as a deserter, a problem compounded by the constant lying and stealing he has to do in the course of his adventure. To him, it’s not an adventure but a nightmare, and once Agnès appears to be safe, all he wants to do is go home — so much so that he turns himself in to the police. “Sir, could you please arrest me?” he asks, approaching an officer. “I’m a deserter, I lost my uniform, I flew without a ticket, conned an invalid, I fought with men of all colors and nations, and I drive around in a stolen pink car with little green stars. I’m also guilty of public indecency. The handcuffs, please.” But it does him no good: the policeman doesn’t understand French, and Adrien doesn’t speak Portuguese.

Still, for all of his displeasure with this situation, his determination to save Agnès whenever she’s in danger never wavers, though he sometimes seems more annoyed than madly in love with her. There’s a jarring moment at the beginning of the movie, right after Adrien arrives in Paris, when he declares to his friend Lebel (Roger Dumas) that if Agnès has found someone else in his absence, “bang! It’s over,” complete with slapping gestures. Lebel is suitably concerned and urges him against the use of violence. “Nobody takes me for a ride!” Adrien replies. Perhaps the ironic punchline — Adrien is, after all, about to go on the ride of his life because of Agnès — is the sole reason for this uncomfortable exchange, which has no real bearing on the rest of the film. Perhaps, too, it’s part of a macho facade; later, at De Castro’s party, he brags to the other guests about his military exploits, like hanging off of a burning airplane by his jaw. “It’s not true,” Agnès says, laughing. “He’s never left his barracks!” As he demonstrates throughout the movie, he’s certainly capable of handling dangerous challenges (though none of them are quite that extreme), but he’d much rather be enjoying himself back in the relative safety of Paris, and would be if it weren’t for Agnès. Whatever his faults, he does care about her. After describing his ideal woman as a sort of domestic goddess (who plays the harp, to boot), he says of Agnès, “She can’t boil an egg, but I follow her across the world. Is that normal?” 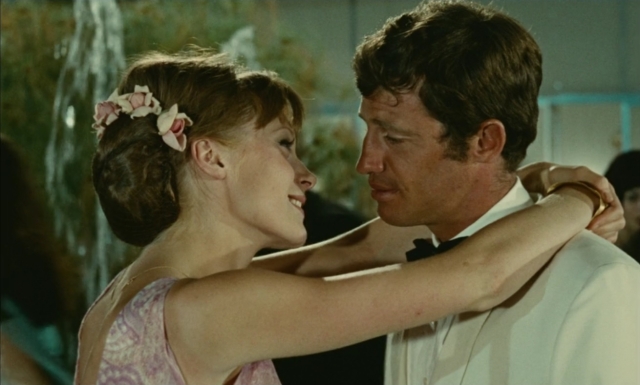 Agnès, meanwhile, doesn’t have a great deal to do for the plot beyond serving as the damsel in distress, though “distress” may not be the best word. She’s upset and afraid when circumstances are especially bleak, but otherwise she seems much less troubled by everything going on than might be expected. Unlike Adrien, who’s always on edge, she takes time to admire the scenery, to dance with a group of locals in Rio, to mourn a dog she owned when she and her father lived in Brazil, so that she tends to come across as charming, ditzy, or a little of both.

In a way, her attitude is a fitting one for a film like That Man from Rio, which never takes itself too seriously. Even on the rare occasions when it touches on important issues, it doesn’t linger on them long. (The last scenes in Brazil, for example, show the rainforest being cleared and an indigenous family standing along a road, looking as if they might have been displaced. In light of Catalan’s earlier comments about the barbaric Europeans who destroyed the Malteks, it seems that the movie might be trying to say something — but then it cuts to a comedic epilogue in Paris.) Like Adrien at the start of his leave, it just wants to have fun, even if its idea of fun is very different from his. 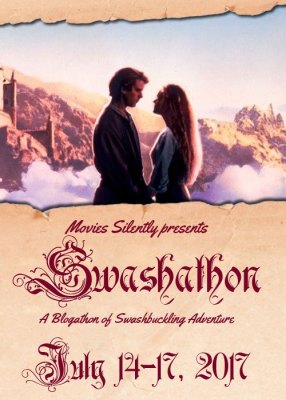 This post is part of the Swashathon, hosted by Movies Silently. Click the banner above to see all of the other great posts.