“A tontine is, in point of fact, a lottery — a lottery, plain and simple, gentlemen. Into this tontine each parent or guardian has placed for each of you, and in your name, the sum of one thousand pounds sterling. The sum so constituted is to be administered by a self-perpetuating board and held in trust by them for whomsoever survives. This £20,000 will grow and grow under astute management who will charge but a nominal fee, and this — by then — great sum will be handed to the one amongst you who is the last surviving member of the tontine. It is as plain and as simple as that.” So the premise is laid out at the start of Bryan Forbes’s 1966 film The Wrong Box, though “plain” and “simple” are hardly the right words for the farce that follows.

The would-be beneficiaries of this arrangement are twenty schoolboys in nineteenth-century England, and as the years go by, they begin to die off one by one — generally as a result of either their own stupidity or some bizarre accident. (One even meets an untimely end at the hands of Queen Victoria herself.) At last, some six-plus decades on, only two elderly men remain: brothers Masterman and Joseph Finsbury (John Mills and Ralph Richardson, respectively), who haven’t spoken to each other in forty years, despite being next-door neighbors.

Cash-strapped Masterman is determined to outlive his sibling so that he can pass the fortune on to his grandson Michael (Michael Caine), a medical student “with a mountain of debts and a doubtful future as an idiot in a profession of rogues and charlatans” (as his not-particularly-affectionate grandfather puts it). Joseph, meanwhile, seems comparatively indifferent to the money. He’s much more interested in explaining the origin of the word “tontine” or in discoursing at great length about any fact that happens to pop into his head, to anyone unfortunate enough to be in his presence. (“I wonder if you realize how many times the word ‘whip’ occurs in the Old Testament: 174 times. Oho, I see you’re impressed. But that figure is infinitesimal when you consider…”) His nephews Morris (Peter Cook) and John (Dudley Moore) are another story. Orphaned at a young age, they’ve been taking care of Joseph for years, “keeping him alive,” all for the sake of the wealth that may one day be his and, in turn, theirs.

When they receive word that Masterman is dying, Morris and John are overjoyed. Cutting short a trip to Bournemouth, the two young men and their uncle (who attributes Masterman’s ill health to his boyhood fondness for nutmeg tarts) rush back to London, only to have their train crash en route. Amid the debris, Morris and John discover what appears to be Joseph’s mangled body, much to their horror — though their grief is solely for the money, not the man. “Your brother’s on his deathbed. Couldn’t you have waited a day or so, you stupid oaf?” Morris chastises the corpse. He won’t give up that easily, however. As long as he and John can conceal their uncle’s death until after Masterman expires, making it look as if he passed away suddenly upon hearing the news, Joseph will be regarded as the last survivor of the tontine. All they have to do is obtain a signed, otherwise blank death certificate and ship the body home in a barrel — a plan that might work, except that a large crate containing a statue is being delivered to Masterman’s house that same day. Mix-ups, misunderstandings and mayhem ensue, as they must. 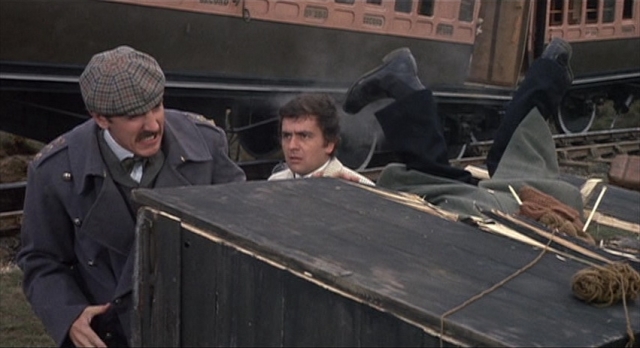 Although it deals almost entirely in morbid subject matter, The Wrong Box never treats any of it with undue gravity, or even with due gravity. Moreover, the Victorian setting, which might weigh down another movie — especially a farce — is itself a source of fun and humor. This is especially true of scenes involving Joseph’s ward, Julia (Nanette Newman), and her tentative romance with Michael, in which sexual repression is taken to ridiculous extremes. (Never before or since has a bare forearm provoked such excitement.) The film is also packed with memorable characters, from the leads down to supporting players like Peacock (Wilfrid Lawson), Masterman’s devoted butler, and Dr. Pratt (Peter Sellers), a befuddled, less-than-upstanding physician who lives and works in the midst of innumerable cats. Some characters are greedy, corrupt and willing to commit murder if need be; others are just decent people caught up in increasingly convoluted and confusing circumstances. Whatever the case, they would all do well to consider a warning that Masterman gives Michael near the beginning of the movie: “Death cannot be assumed simply because signs of life are not present.”

This post is part of The Marvellous Michael Caine Blogathon, hosted by Realweegiemidget Reviews. Click the banner above to see all of the other great posts.