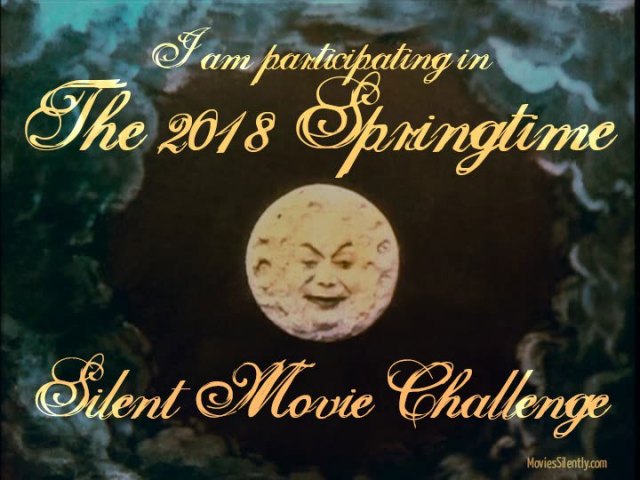 Fritzi of Movies Silently is hosting the Springtime Silent Movie Challenge as a means of promoting early cinema. The rules are simple: watch five films from 1905 or earlier, watch another five made between 1906 and 1914, and write up your thoughts about them. Here are mine in chronological order, along with links where they can be viewed online: 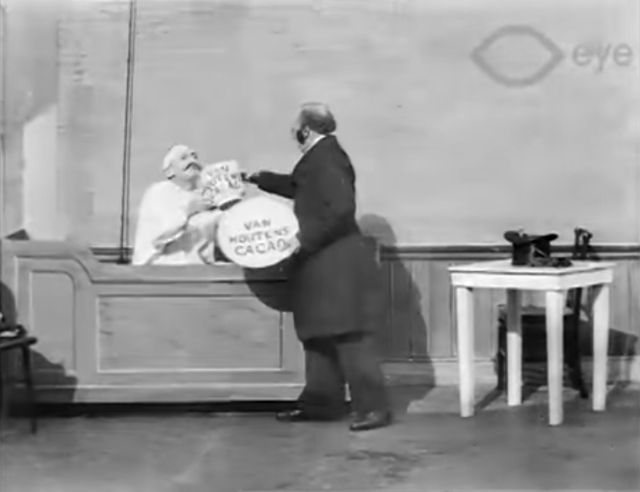 Despite resembling a stage play, this nineteenth-century Dutch film is essentially a proto-television commercial. A man tosses and turns in his bed, clearly in great physical distress, and pulls on a rope to summon a doctor. Following a quick examination, the doctor walks offscreen and returns with a dose of “Van Houtens Cacao,” as the enormous cup and its equally large saucer helpfully proclaim in painted letters. The ill man gulps it down and immediately revives, much to his delight. While it’s not especially clever or amusing (though the patient’s extremely broad, pantomimetic acting is probably my favorite aspect), it’s interesting to see how this new medium was being used for advertising even before the turn of the century. (For what it’s worth, the title translates as The Sick Municipal Official; I don’t know what significance the man’s job might have to the “story,” if any.) 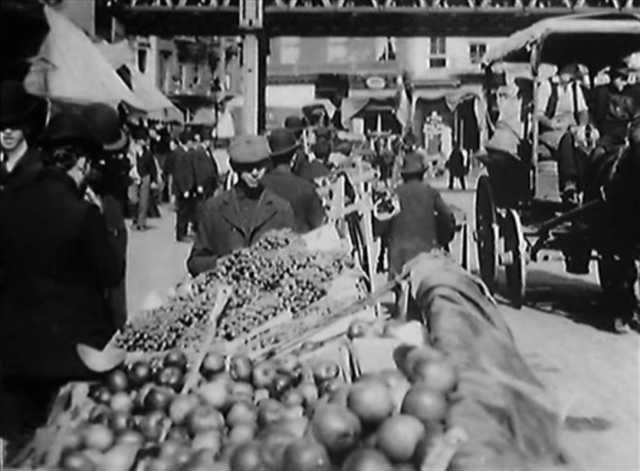 In the National Film Preservation Foundation’s notes on this Edison short, which depicts a policeman driving away pushcart fruit vendors on the streets of Manhattan, Scott Simmon writes, “As with many early actualities, it is difficult to say how much of Move On is document and how much was staged for the camera—probably a little of both.” Certainly the policeman comes across as a bit self-conscious and stiff, but apart from that, the film — in spite of its simple subject and brief runtime — offers a vivid glimpse of everyday life in New York during that time period. I also liked the placement of the camera alongside a cart full of apples. As a viewer, it made me feel involved, as if I were actually standing on the street and watching this scene play out — quite different from the staginess of something like De zieke gemeente-ambtenaar.

Grand Display of Brock’s Fireworks at the Crystal Palace (1904)

While watching this hand-colored (and, in some shots, tinted) footage of a London pyrotechnic show, I found myself thinking of Norman McLaren’s 1955 short Blinkity Blank, an animated piece in which the drawings — many of them firework-like — were etched directly on the film. Fireworks in general might be seen as a kind of abstract art, and here, the applied hues standing out against dark backgrounds give them an appealing unreal quality. The second half of the film shifts its focus to more representational light displays: a naval battle, a cockfight, firemen trying to extinguish a blaze, portraits of then-king Edward VII and his wife Alexandra. It’s pretty impressive stuff, especially in color, and I’m glad that it was preserved. 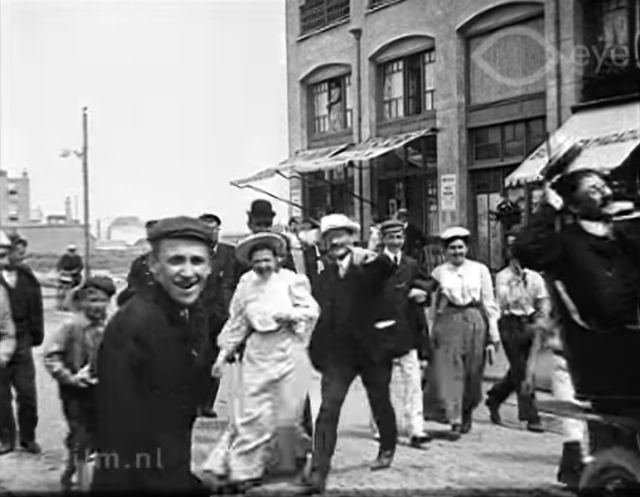 A man sitting in a chair on the beach fails to notice that the tide is coming in until he’s completely surrounded by water. In a panic, he removes his pants before wading back to dry land, and his trouserless state gets him chased throughout the Dutch town of Zandvoort by a huge crowd. The EYE Film Institute’s notes explain that “‘Messrs. Alberts Frères’ had staged the whole incident for a film in which two of the most popular genres of that period — the locally-shot film and the chase film — would be combined.” The fictitional side of it is nothing special, but I loved seeing the ordinary people watching and taking part in this unusual spectacle. Although some seem bemused, most of them — children and adults alike — appear to be having a ton of fun, and few can resist looking into the camera or even walking right up to it. Like Move On, it’s a small but fascinating picture of a bygone era. 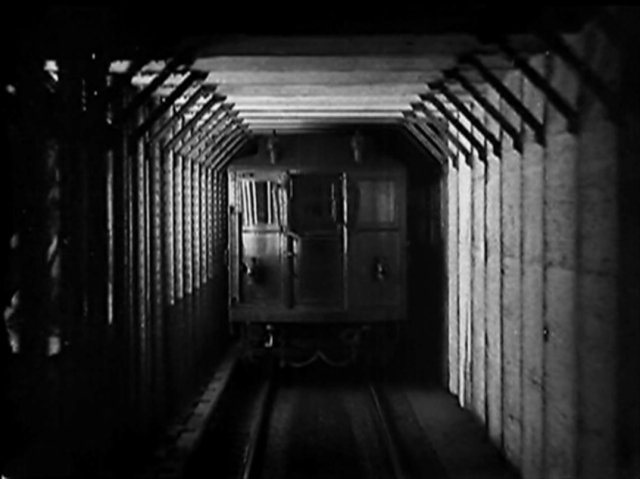 Shot about seven months after the opening of New York’s subway system, this film from Biograph follows a train from Union Square to Grand Central Station. It may not be the most entertaining movie in the world — after all, there’s not a great deal to see underground, especially when facing the back of a train — but it has significant historical value and might also appeal to viewers interested in transportation or engineering. I enjoyed seeing the passengers waiting on the platforms, most prominent at the end, as well as the occasional appearances of another train carrying the lights needed for the film. (The cameraman, for the record, was Billy Bitzer, who frequently worked with D. W. Griffith.)

The alternate title, What Was Accomplished by an Edison Business Phonograph, gives it away before the film even begins: This is an advertisement (made by Edison, naturally). However, it’s much more elaborate and natural than De zieke gemeente-ambtenaar, illustrating how far the medium had come in the space of eleven years. Two businessmen and their female stenographer are overwhelmed with work until a salesman shows up to demonstrate a machine that can take dictation on wax cylinders, saving time and improving morale all around. Much of the film’s value is as a piece of history, offering the chance to see how this machine worked and what office life was like shortly before World War I. Scott Simmon’s notes explain that stenographers initially felt that Edison’s business phonograph was a threat to their jobs, and this film is meant to demonstrate otherwise — hence the title. 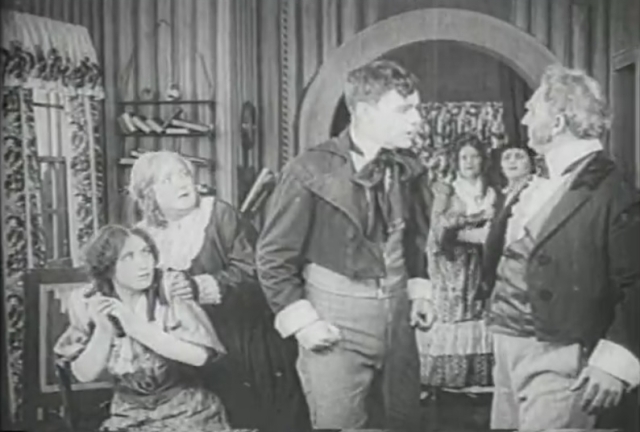 Clocking in at over thirty minutes, this Dickens adaptation from the Thanhouser Company is, by far, the longest of the films I watched. Considering that the novel runs some nine hundred pages, the story — about a young man making his way in the world, protecting his sister, falling in love and contending with a cruel uncle — is highly condensed by necessity. Madeline, Nicholas’s love interest, is only introduced with less than five minutes remaining, for example; moreover, the character Smike essentially disappears after a while, and several significant plot points related to him are omitted. Still, it’s an admirable effort, and because so many different scenes and storylines are crammed into half an hour, it moves along at a fast pace. It struck me as the sort of film adaptation that might inspire someone to read the book in order to fill in the (many) blanks.

Known in English as For the Honour of the Saucepan, this Italian comedy is about the fierce rivalry between two adjacent hotels — and by “fierce,” I mean “incredibly violent.” When a massive brawl (complete with maids pulling each other’s hair and chefs hurling pots and pans) gets the respective owners hauled into the police commissioner’s office, the two men manage to make peace, but their unwitting employees back at the hotels are still very much at war. Frankly, there’s not much more to this than “people fight and smash things,” though the sheer energy the actors put into this destructiveness is quite remarkable; plus, at a mere six minutes in length, it goes by quickly enough. 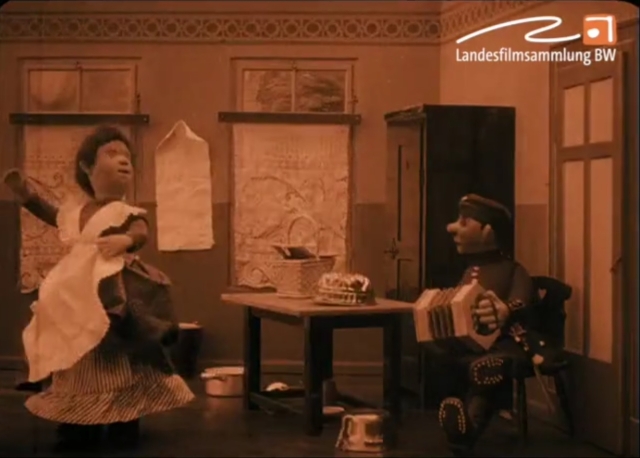 This is a delightful stop-motion short about a boy who dozes off while playing with toy soldiers and dreams that his playthings have come to life. There’s no real story and the animation may be on the choppy side, but that’s part of the charm, and the filmmakers seem to have taken great pleasure in experimenting with this form: pieces of furniture move around the room unassisted, living creatures and objects alike disappear or get blown away by a gust of wind or transform into something else. The attention to detail is excellent too, with numerous charming little props on display, including a concertina, a vase of flowers, a picnic basket and a camera on a tripod.

A husband discovers that his wife has received a love letter from another man, inviting her to his house. He confronts his rival, and the two men end up fighting a duel for her honor. It’s a standard, hackneyed tale, but the interest here is in the telling: The camera remains focused on the characters’ feet the entire time, save for a brief shot of the letter itself. In fact, the triteness of the plot actually helps, making it easier to follow what’s going on, though there are quite a few surprising and creative touches. It’s impossible to imagine this as anything other than a silent film because dialogue would be utterly superfluous, a liability rather than an asset.

I’ve barely scratched the surface of early cinema, but I feel that I gained a lot from participating in this challenge. It was both fun and educational to see what a wide variety of subjects, styles and purposes can be found in these films, and I look forward to exploring the era even further in the future.