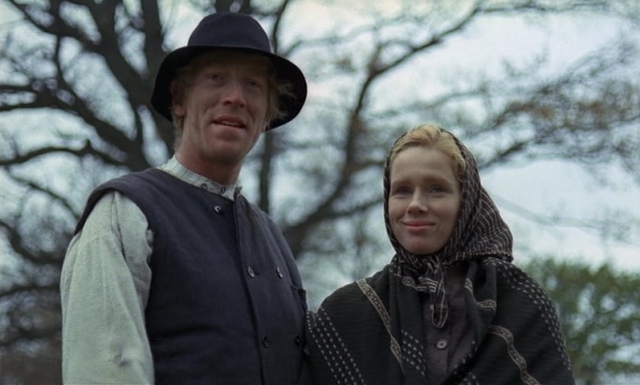 It may be said that Jan Troell’s The Emigrants (1971) and The New Land (1972), based on a series of four novels by Vilhelm Moberg, are not so much two separate films as they are two halves of a single epic, running some six and a half hours in total. Valid as that is, however, the division is hardly an arbitrary one. Each movie has its own focus, its own purpose, complementary to those of its counterpart. The Emigrants deals with the birth of a dream; The New Land sees that dream made flesh, though the reality of it is far more complex than what was imagined beforehand.

For young couple Karl Oskar and Kristina Nilsson (Max von Sydow, Liv Ullmann), life on a farm in mid-nineteenth-century Sweden is a constant struggle. Their soil is rocky and infertile; the crops they do manage to grow fall victim to late-season snow or withering heat or a barn fire caused by a freak lightning strike. “The earth here is cursed,” Karl Oskar declares. “Everything goes wrong no matter how we break our backs.” He wants to go to the United States, having read that “hardworking farmers have excellent prospects” there, but Kristina is reluctant to leave her homeland. It takes the tragic death of their young daughter — who, in her hunger, gorges herself on a bowl of porridge meant for multiple people — to change her mind. “I’m not against moving to America anymore,” she says, numb with grief. 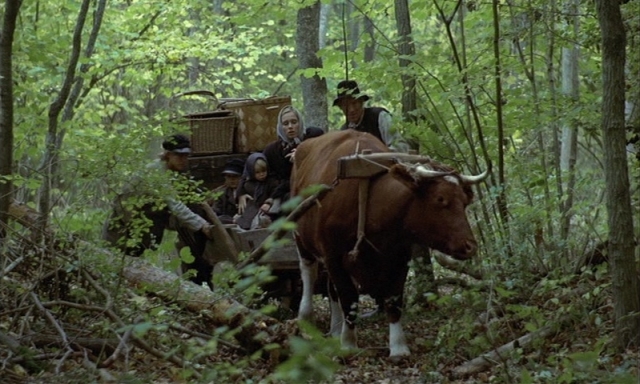 And so Karl Oskar, Kristina and their three surviving children set out for an unfamiliar world, along with a number of other relatives and acquaintances. Their fellow travelers have their own reasons for emigrating: Karl Oskar’s teenage brother Robert (Eddie Axberg) and his friend Arvid (Pierre Lindstedt) want to escape their lives as farmhands under a cruel master, and books have led them to believe in America as a veritable paradise on earth; Kristina’s uncle Danjel (Allan Edwall) and his followers seek religious freedom, as they’ve been persecuted in Sweden for worshiping outside of the state church. After a long and difficult sea voyage and an additional journey inland to Minnesota, Karl Oskar finds an area by a lake where his family can build a home — and it’s here that The Emigrants ends and The New Land begins.

The New Land, to an even greater degree than its predecessor, is not a plot-driven film. Karl Oskar and Kristina do, indeed, prosper in America, but it’s a gradual process, depicted subtly, more an accumulation of both significant events and everyday moments than a tightly structured story. The film makes regular use of ellipses; in one scene, for instance, the couple introduces the most recent addition to the family — a baby heretofore unmentioned and unshown — to Robert, who has just returned to Minnesota after an absence of several years. Time passes, sometimes slowly, sometimes rapidly, seen in the believable aging of the characters, in the development of the Nilssons’ homestead and in the changing of the seasons. 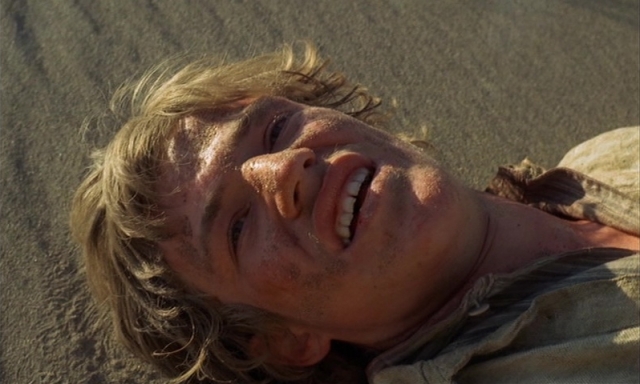 Troell demonstrates great skill in telling a tale — or, as it were, expressing a sense of life — through the use of images. Perhaps the strongest examples of this are the flashbacks concerning Robert and Arvid’s naive, ill-fated quest for gold in California. Dialogue is sparse in these sequences, which rely instead on a mixture of diegetic sounds, non-diegetic percussive music and montages of striking visuals; at one point, the movie cuts back and forth between two shots with such speed that it takes on a strobelike, hallucinatory effect. (Troell, notably, handled the shooting and editing as well as the directing, and he co-wrote the screenplay to boot.) The whole film has an earthiness to it, but while that’s often a source of beauty, here all seems sordid, filthy, downright horrific at times.

Robert’s story provides an important counterpoint to that of his brother and Kristina. Karl Oskar, comparatively modest and practical, is content with building up his farm, earning enough money to give himself and his family a comfortable existence, becoming a respected figure in the local community; Robert, due to both his youth and his temperament, has much grander dreams and more idealistic notions about what America has to offer. He takes greater risks, aims higher, and thus has all the farther to fall when he comes up against misfortune and the harsh realities of life, especially life in the western United States of that period. “Who doesn’t lose his life out there?” he asks rhetorically after his return to Minnesota, still young in years but physically, mentally and emotionally a broken man. 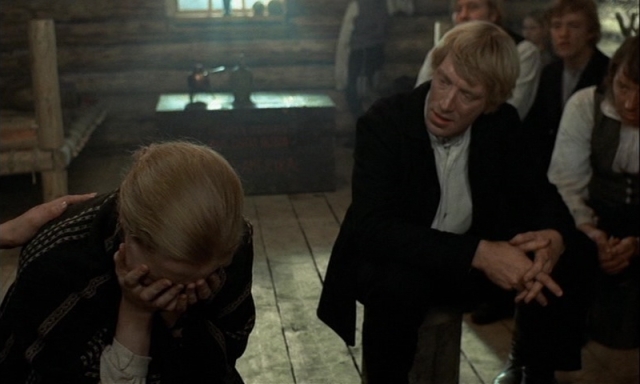 He isn’t the only person who falls apart rather than flourishing in America. Karl Oskar is shocked to find a neighbor, an elderly Swedish woman, lying dead in her yard while her ill, perpetually drunk adult son does nothing for her. “Not everyone can take it here,” the son insists tearfully. There are high costs to emigrating, including the possibility of failure and isolation from nearly everybody and everything a person has ever known. Kristina, much more so than her husband and their acquaintances, never quite overcomes a profound sense of homesickness, and Karl Oskar tries to cheer her up by suggesting that they change the name of their new home, Ki-Chi-Saga, to Duvemåla, after the place where she lived in Sweden.

Although this is merely a little act of love toward his wife, the substitution of a Swedish name for a Native American one has symbolic significance, especially as the film goes on and issues related to the Native Americans in the area become more prominent. When the Nilssons first arrive, Karl Oskar reassures an anxious Kristina that the local tribes aren’t hostile, but that changes over time as more white settlers move in. The Native Americans lose their land; they lose their food, withheld by the government, and starvation reduces some of them to cannibalism. At last, a small group of Sioux men commits a shocking act of violence against a Swedish family in retaliation for these injustices, leading to war and a mass hanging. Karl Oskar, told by a fellow Swede that his land was stolen from its rightful owners, bristles at the perceived accusation. “I paid the government for every single acre, fair and square,” he says. The other man acknowledges the truth in this: “You acted honorably enough. That was all right. It was in accordance with the law. But that law was made afterwards, after they’d done the stealing. And what did they pay for the land? One dollar for 20,000 acres of the most fertile soil in the world.” 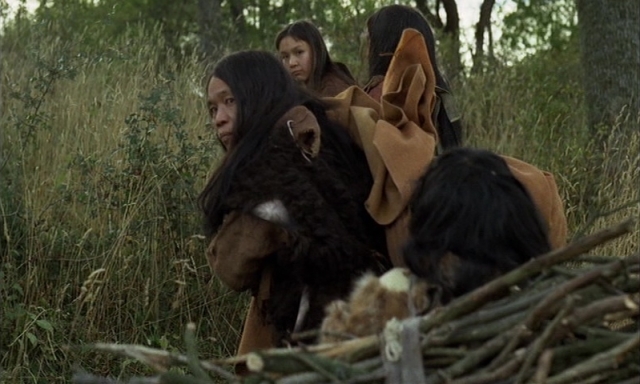 Other conflicts and thorny problems without simple solutions arise in the course of the film. When the Civil War begins and Karl Oskar, by now a citizen, feels obligated to enlist, Kristina is opposed to the idea on the grounds that Christians are forbidden from killing — a clash between patriotic duty and religious principle. (Slavery, for the record, only comes up a few times, but slaves in chains are seen on the riverboat that takes the family inland near the end of The Emigrants, and Robert and Arvid witness a black man being kicked repeatedly by a white man as they travel to California — all the more startling to them because one of Robert’s books had claimed that American slaves were better off than European peasants.) There’s also the question of assimilation, of identity, as the children learn English in school and Karl Oskar considers anglicizing his name to Charles O. Nelson. “You can renounce the Swedish king, but if you give up your Swedish name, I’ll laugh in your face for such vanity!” Kristina tells him. Further challenges crop up because of their particular circumstances or because of the time and place in which they’re living or just because they’re human: language barriers, financial difficulties, prejudice, strenuous physical labor, snowstorms, health problems, loss.

And yet, in spite of all of these sorrows and difficulties and dashed illusions, The New Land is not a film that’s unduly cynical or pessimistic about the immigrant experience in nineteenth-century America. It’s portrayed — at least for some people — as a place of unwonted freedom and opportunity, a place for fresh starts; observe the case of Ulrika (Monica Zetterlund), a prostitute back in Sweden who becomes the respected wife of a Baptist minister. To balance out the hard times, there are moments of joy both great and small, along with more constant compensations such as community, friendship, family and love. Good and bad co-exist in this world, like so many other contrasts: Christian piety and crude sex talk, success and failure, beauty and ugliness, birth and death. It may not be as pure or straightforward as the dream that preceded it, but it’s infinitely more interesting, richer and truer to life. 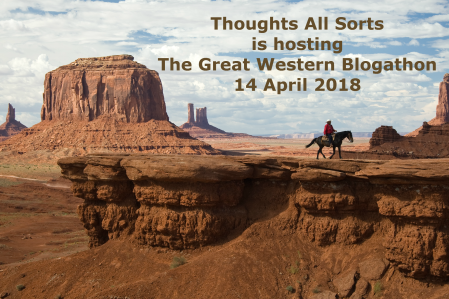 This post is part of The Great Western Blogathon, hosted by Thoughts All Sorts. Click the banner above to see all of the other great posts.