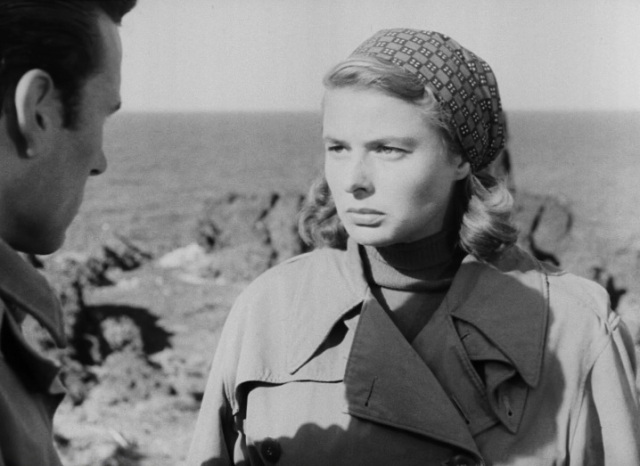 To many people, life on an island in the Mediterranean probably sounds like paradise; to Karin (Ingrid Bergman), the protagonist of Roberto Rossellini’s 1950 film Stromboli, it’s anything but.

At the end of World War II, after a series of international misadventures, the Lithuanian-born Karin finds herself interned in a displaced persons’ camp in Farfa, Italy. Life is bleak for her and the other women there. One of their few diversions is standing at the barbed wire fence that surrounds the camp and flirting with soldiers on the other side, and Karin has struck up an acquaintance with a young man named Antonio (Mario Vitale), who wants to marry her and take her back to his birthplace, the tiny island of Stromboli. She likes him well enough (though she’s quick to point out, quite rightly, that they barely know each other), but what she really wants to do is obtain a visa and move to Argentina. Only when that plan falls through does she accept his proposal. While it may not be her first choice, anything is better than remaining a refugee indefinitely; at last, she’ll have a home again, a place where she belongs — or so she thinks.

It doesn’t take long for Karin to decide that she’s made a terrible mistake. Her first clue comes even before she sets foot on the island: from the deck of the boat transporting them there, Antonio points out Stromboli’s volcano. “Is it always active?” she asks. “Yes!” he replies enthusiastically. “Look, look! The stones are falling in the sea.” Things are no more encouraging once they reach the shore. The village looks positively biblical, untouched by centuries and centuries of change (except where it’s deteriorating), and Antonio’s house is rough, run-down, dirty and virtually devoid of furniture. People, too, are scarce. “This is a ghost island,” Karin says. One person they do meet is the local priest (Renzo Cesana), who’s delighted to see that Antonio has returned to Stromboli now that his military service is over; many other residents, he explains, have left in search of a less difficult existence. Karin is more than ready to follow their example. “I’m different. I’m very different from you. I belong to another class,” she tells Antonio. “I can’t live like this in this filth! It’s no life for civilized people.”

The fact that Karin is played by Ingrid Bergman helps to enhance the tension in this scenario. Here she is, a genuine Hollywood movie star — albeit a European-born one — dropped into a gritty, earthy, neorealistic world, truly an outsider. (Ironically, Bergman’s affair with Roberto Rossellini and the ensuing scandal would effectively exile her from Hollywood for a number of years.) In addition to the nonprofessional actors playing Antonio, the priest, and a lighthouse keeper (Mario Sponzo), the opening credits note that “other characters [are] played by the inhabitants of Stromboli and the women in Farfa’s displaced persons’ camp,” for extra authenticity.

Inevitably, Karin soon comes into conflict with her new neighbors. Another movie might set up a clear-cut good versus evil, right versus wrong clash in these circumstances — perhaps Karin is a suffering innocent and everyone persecutes her for being different, or perhaps the islanders are honest, simple, salt-of-the-earth types whom she scorns or otherwise mistreats — but things are more complex in Stromboli. Although the islanders may be honest, simple, salt-of-the-earth types, they’re also highly insular and judgmental, prone to thinking the worst of Karin, whom they always seem to be watching. When she visits the house of a woman of ill repute in order to make use of her sewing machine, it creates a minor scandal; when she’s seen getting playful with the lighthouse keeper, it’s even worse. Antonio, finding himself branded a cuckold, rushes home and beats his wife without waiting for an explanation. He has his good points — for example, he’s willing to work hard to provide for Karin, swallowing his pride to take a lowly position on someone else’s fishing boat (his own boat having rotted while he was away) — but he’s very much a product of his traditional, conservative, chauvinistic, sometimes brutal culture. “You stupid, stupid, stupid, cruel, savage idiot!” she screams when he laughingly sics a ferret on a rabbit.

Thus, due to her situation, Karin is a sympathetic figure — but that doesn’t necessarily mean that she’s particularly likable. “You have no modesty,” Antonio’s aunt tells her after three women silently reject her invitation to come inside her newly decorated house. It’s hard to deny that; in Karin’s constant insistence that she’s different from her new neighbors, there’s always an underlying implication that she’s superior to them, entitled to something better. Scoffing at Antonio’s meager savings, she says, “You need much more money for a woman like me.” She has moments of warmth and kindness — the aforementioned invitation to the trio of local women, for instance (though a desire to show off might be tied up in that), or her cheerful involvement in helping some children chase down an octopus — yet she’s also self-centered, haughty and prone to bad decisions. At one point, she even gets a bit too forward with the priest, the only person who seems to understand her. She and the natives of Stromboli literally and figuratively speak different languages, and the hard life and hostile land that many of them accept or love (though, to be fair, many others have left) is torment to her. It’s as if she’s gone from one prison to another.

Shortly after Karin arrives on the island, there’s a scene in which she leaves her house, unable to bear it any longer. “I want to get out!” she says, half-frantic, as she runs back and forth along the narrow streets and alleyways of the village, the only sign of human life the eerie sound of a baby crying somewhere in the distance. With the camera positioned high above her, it looks as if she’s trying to escape from a labyrinth. Maybe this is her personal hell; maybe it’s only a temporary purgatory. “You don’t know about me, and you don’t know my past,” she tells the priest. “I have been lost, I have sinned, I have chased after illusions, adventure, as if an evil force were in back of me. Now I realize how wrong I’ve been. I want to make something out of my life, but this is too much.” As her situation grows increasingly intolerable, she becomes willing to do anything to gain her freedom, her salvation, even if that means walking across an active volcano — but her redemption just might come in a form she doesn’t expect.

This post is part of The 4th Wonderful Ingrid Bergman Blogathon, hosted by The Wonderful World of Cinema. Click the banner above to see all of the other great posts.