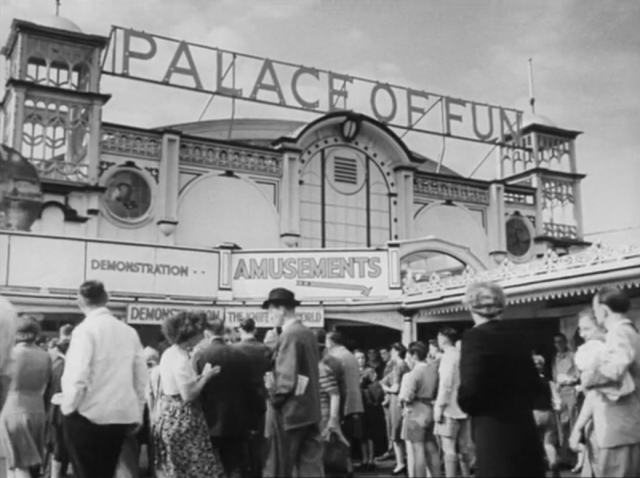 But in the years between the two wars, behind the Regency terraces and crowded beaches, there was another Brighton of dark alleyways and festering slums. From here, the poison of crime and violence and gang warfare began to spread, until the challenge was taken up by the Police.

This is a story of that other Brighton — now happily no more.

The 1948 (or 1947, according to some sources) film Brighton Rock, directed by John Boulting and based on Graham Greene’s 1938 novel of the same name, follows its opening credits with this written statement, which scrolls over a shot of a multitude of happy holidaymakers relishing the sun, sand and surf. No doubt its primary purpose is to reassure potential tourists who might be put off by the film’s unsavory depiction of the city, yet it also establishes the theme of duality that will run throughout the story.

From these generalities about Brighton’s criminal underbelly, the film quickly moves to the specific through words and images that reinforce the fact that there are two very different worlds coexisting here. A man is seen reclining on the beach, napping or simply relaxing, with his jacket folded under his head as a pillow and a newspaper spread across his face — but the newspaper’s leading story is about a murdered gangster’s mutilated body being found in a gravel pit. It’s almost a little disorienting: considering the pebbly nature of Brighton’s shingle beach and the man’s lack of movement, it’s possible to think, if only for an instant, that he’s the corpse in question.

The actual victim is one William Kite, a local gang boss killed by a rival gang for allegedly revealing information to crime reporter Fred Hale (Alan Wheatley), who used it to write an exposé on the area’s slot machine racket. Kite’s followers blame Fred for their former leader’s death, so when they discover that he’s going to be in Brighton as part of a newspaper publicity stunt — playing the role of Kolley Kibber, a man who hides cards around the city that people can exchange for cash prizes — they decide to inform Kite’s successor, the new head of the gang. One man, Spicer (Wylie Watson), is reluctant, however. “Now be careful, Dallow,” he urges a cohort (William Hartnell) who rushes upstairs to share the news. “You know what Pinkie is.”

To be sure, “Pinkie” isn’t exactly the most intimidating nickname in the world, and the fact that he’s still in his teens doesn’t help matters, but Pinkie Brown (Richard Attenborough) more than makes up for these disadvantages with his utterly ruthless personality. Apart from a brief clip in the opening credits, he’s first seen lying flat on his back on a bed, playing with a loop of string; although it’s shot differently, his position evokes Uncle Charlie’s initial appearance in Hitchcock’s Shadow of a Doubt (1943), which proves quite apt considering their shared psychopathic tendencies, their misanthropy (and misogyny, in particular), their willingness to kill even innocent people who pose a threat to them by knowing too much. When Dallow shows him the newspaper article about Kolley Kibber’s upcoming visit, his face is eerily impassive — or is there just the faintest trace of pleasure lurking in his eyes or around his mouth? He wants revenge, and he’s not going to miss out on this golden opportunity.

Poor Fred doesn’t stand a chance, as he discovers when Pinkie, Dallow and another gang member, Cubitt (Nigel Stock), confront him in a bar. He manages to get away from them there, but in spite of all of his efforts at self-preservation — everything from trying to find a woman to have a drink with him, lest he be caught alone, to running through the crowded streets — it’s only a matter of time before he meets his doom on a Dante’s Inferno ride at the so-called Palace of Fun, where he finds himself sharing a seat with Pinkie. The half-frightened, half-delighted screams of other passengers reacting to the ride’s silly painted skeletons and spooky faces contrast sharply with Fred’s deep and genuine terror, which reaches its peak when Pinkie pushes him out of the car and into the sea below. His mission accomplished, the young gangster gets off of the ride, strolls over to a shooting gallery and blasts the heads off of three pipes with three shots; sometimes, the divisions between the merry holiday world and the criminal underworld seem very thin indeed. Because he neither smokes nor eats chocolates — nor drinks, for that matter — Pinkie chooses a doll as his prize, remarking that it reminds him of church. He takes it home and tears out its hairs, one by one.

At first, things appear to be going according to plan, or even better than expected. The passengers behind Fred and Pinkie on the ride, potential witnesses, are a blind man and a little girl; the coroner rules that Fred died of natural causes, due to a bad heart; and Spicer, following orders, has distributed the Kolley Kibber cards around town, making it look as if Fred, as Kibber, stuck to his schedule and was still alive well after the murder actually happened. Then Pinkie discovers a potentially fatal flaw in this ruse: Spicer left a card under a tablecloth at Snow’s Café, where Kibber was to eat lunch. If his waitress finds it, she’s likely to realize he wasn’t the real Kibber/Fred and, worse yet, might be able to identify him to the police. Indignant — all the more so because none of his men will go back there to fix the problem themselves — Pinkie hurries off to the restaurant in hopes of retrieving the card before it’s too late. He can’t find it, but he does find Rose (Carol Marsh), the young waitress who served Spicer and is now in possession of the evidence. 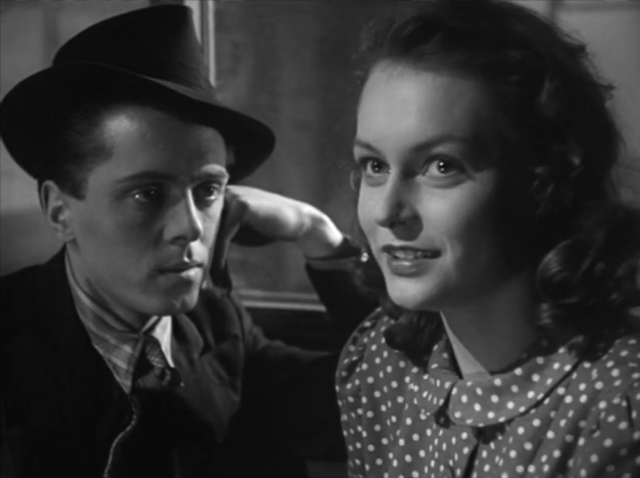 Rose is a kind of mirror image of Pinkie. Both have names related to colors (and similar colors at that), both are seventeen years old, both are Catholic — and yet, in virtually every other way, the two are total opposites. The fundamental differences between them are abundantly clear when they discuss their mutual religion: Rose — sunny, earnest, open-hearted and childlike — asks whether Pinkie believes it’s true, an eager smile on her face. “Of course it’s true. These atheists don’t know nothing. Of course there’s hell, flames, damnations, torments,” he says, gazing into the distance like a man haunted. “And heaven too, Pinkie,” a still-smiling Rose adds. “Maybe,” he replies.

Rose may be Pinkie’s most obvious antithesis, the innocent, pure-hearted angel to his homicidal, power-hungry devil, but there’s another representative of goodness in the film: Ida Arnold (Hermione Baddeley), a Pierrot-costumed performer in a local stage show. Ida met Fred on the last day of his life (he asked her to eat with him and even to come back to London with him, so desperate was he to avoid being left alone and vulnerable), and she doesn’t believe his death was a natural one, no matter what the autopsy says. When a police inspector (Campbell Copelin) insists that the case is closed, she resolves to take matters into her own hands. “I believe in right and justice, and I’m going to see that it’s done!” she declares. Loud and brassy, with bleached blonde hair and some rather offbeat methods — at one point, she tries to contact Fred in the afterlife by closing her eyes and picking out random letters in the newspaper, which she believes form a message from him — she’s nothing like Rose, but her goodness is of a much more practical variety. She goes out and pursues the truth tenaciously, using her wits, questioning anything that doesn’t seem right; Rose, on the other hand, is innocent, naive and trusting to the point of stupidity.

When Pinkie almost immediately invites Rose to meet him at the Palace Pier at night in order to “get acquainted,” she, already charmed by his attentions, thinks it’s a romantic gesture; he uses it as an opportunity to not-so-subtly hint that she might get her face slashed if she talks to anyone about the man who actually left the card behind. Although she’s startled and frightened by his words, she expresses her willingness to cooperate and her faith in him, even a kind of admiration. “You know an awful lot of things, don’t you?” she says. Another woman might continue to see Pinkie solely out of fear of repercussions, but Rose does it out of love, a love that seems to grow and grow over time, against all reason. She’s not blind to his faults and his lifestyle, exactly, but she assures him that she doesn’t care what he’s done; what’s more, she believes in the possibility of reformation and redemption. “People change. Repent,” she insists to Ida, who’s been trying to make her see her relationship with Pinkie for what it really is: a heartless, manipulative act of self-protection on his part, imbued with loathing for her. “Oh no, they don’t, my dear,” Ida replies.

Rose is love, salvation, goodness; Pinkie is hatred, damnation, evil. He’s nevertheless a human figure, in his way. One gets the sense that he’s always trying to prove himself because of his youth and inexperience. Other people — the police, rival gang leader Colleoni (Charles Goldner), his own men — often look down on him, threaten him, doubt him, question him, advise him to give up on the business. (Notably, whereas Pinkie and his gang are headquartered in a shabby house, Colleoni operates out of a luxurious hotel, living in a room where Napoleon III used to stay — indistinguishable, at least on the surface, from the respectable face of Brighton.) Still, he’s far too cruel and vicious to be sympathetic. Even Dallow, essentially his right-hand man, is gravely concerned for Rose’s welfare and determined to protect her from Pinkie. Like Ida, he can see what the girl can’t or won’t. “He’d kill you too if he could find a safe way to do it,” Ida tells her — and she’s right.

This post is part of The Noirathon, hosted by Maddy Loves Her Classic Films. Click the banner above to see all of the other great posts.