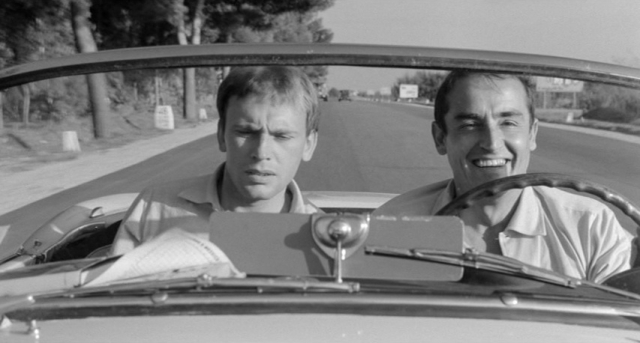 One fateful summer day when Rome is virtually deserted due to the Ferragosto holiday, timid law student Roberto (Jean-Louis Trintignant) makes the mistake of looking out of his window just when a strange man (in more ways than one) has stopped for a drink at the faucet outside. This man, Bruno (Vittorio Gassman), is running late to meet some friends and can’t find a phone with which to contact them, as all of the shops are closed. Roberto obligingly offers his. Bruno makes the call, thanks Roberto and leaves the apartment (though only after making a rude comment about his host’s mother, rubbing grease on the sofa and breaking the bathroom shelf) — and then he comes back. Suddenly, Roberto finds himself dragged into an eventful and ever-extended road trip from which he can’t seem to escape, whether he wants to or not.

No matter how many times I watch Il Sorpasso, it never fails to make me laugh, thanks in no small part to the larger-than-life Bruno. Brash, confident, fond of antagonizing people yet also capable of charming them, he’s an unforgettable character, and it’s no wonder that Roberto is both frightened and fascinated by him. With their wildly different personalities and approaches to life, the two men make an endlessly entertaining pair. Plus, funny as it is, the film can also be poignant, touching and thought-provoking — all the more so when you know how it ends.

Famous director Guido Anselmi (Marcello Mastroianni) is about to start work on his next film — or so everyone around him thinks. In truth, he doesn’t know what he wants to do, and this creative crisis is compounded by problems in his private life involving his increasingly frustrated wife (Anouk Aimée), his mistress (Sandra Milo) and countless issues stemming from his past, his personality, his ideas and his desires. Then again, it’s hard to say exactly where his private life ends and his professional life begins.

This is one movie that I knew had to go on this list, as it happens to be my favorite of all time. I remember being overwhelmed by the whole experience when I first saw it (it’s a lot to take in) and though it’s much more familiar to me now, I still get carried away by it. Funny and sad and haunting, often all at once, it manages to combine the past and the present, the real and the imagined, in such a seamless way, almost like a dream at times. Fellini considered calling this film La Bella Confusione, or The Beautiful Confusion — a perfect description. 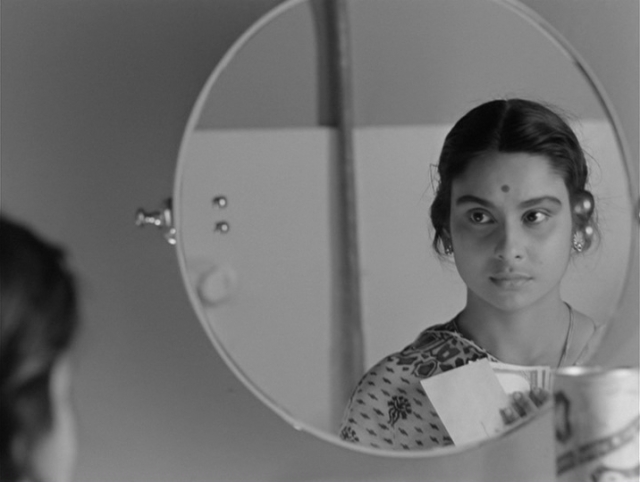 Money is tight for young Kolkata housewife Arati (Madhabi Mukherjee) and her family, as her husband (Anil Chatterjee) is the sole breadwinner for a household made up of four adults, a teenager and a small child. In order to ease the financial burden, she takes the bold and rather frightening step of obtaining a job outside the house, selling knitting machines door to door. Despite her initial uncertainty, she soon develops a knack and passion for her work, yet there are difficulties at home as a result — not only because her conservative in-laws disapprove and her little boy misses her, but above all because her initially supportive husband finds himself feeling increasingly inadequate, all the more so once he loses his own job.

Satyajit Ray and Madhabi Mukherjee would do great work together the following year in Charulata (1965’s The Coward is also well worth seeing), but The Big City has always been my favorite of their three collaborations, and possibly my favorite Ray film overall (though it’s hard to beat his 1955 debut, Pather Panchali). It’s wonderful to see Arati blossom as she takes on this new role and discovers and develops abilities that she never realized she possessed. All along, too, she never loses sight of the things that are most important to her, never loses her sense of right and wrong, even when she could benefit by overlooking an injustice committed against someone else. She doesn’t become a different person; she becomes a richer, stronger version of the person she always was. 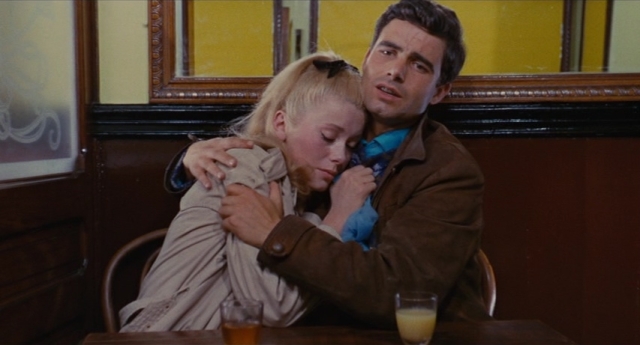 The Umbrellas of Cherbourg (1964, directed by Jacques Demy)

Guy (Nino Castelnuovo) and Geneviève (Catherine Deneuve) are young and in love — too young, according to Geneviève’s mother (Anne Vernon), who disapproves of their desire to marry and thinks they should stop seeing each other. That’s not enough to keep them apart, but they find themselves separated nonetheless when Guy is shipped off to the war in Algeria. Not long after he leaves, the teenage Geneviève discovers that she’s pregnant, and in Guy’s absence, she’s forced to make a difficult decision.

Nobody does candy-colored heartache as exquisitely as Jacques Demy. (Does anyone else do candy-colored heartache? If so, it’s hard to imagine that they could top this.) Michel Legrand deserves a nod as well, because his music is an essential part of the film’s success. Have I mentioned that this is a musical? In fact, it’s practically an opera: all of the dialogue is sung. Demy could play around with the genre, as seen in 1967’s The Young Girls of Rochefort (another favorite), but there’s a lovely sincerity underlying his films that helps to give them their magic and romance, and it’s especially in evidence here. And oh, those colors! 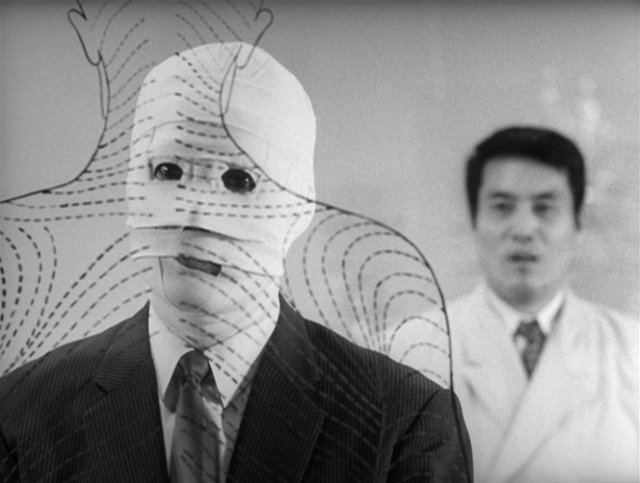 The Face of Another (1966, directed by Hiroshi Teshigahara)

After an accident at work renders him disfigured, bitter and insecure, a man named Okuyama (Tatsuya Nakadai) seeks help from an ethically dubious psychiatrist, Dr. Hori (Mikijirô Hira). Hori comes up with “an interesting experiment”: he’ll create an extremely lifelike mask to replace the bandages that constantly cover his patient’s face, on the condition that Okuyama must report everything he does from then on. Will he use the mask to rejoin society, Hori wonders, or will he use it to escape from himself?

I’m always torn between this and Woman in the Dunes (1964) as my favorite Teshigahara film. At times, The Face of Another seems a bit too self-consciously “artsy” — for instance, when flowing hair is seen filling Hori’s doorway or when a distraught minor character transforms into a dead animal on a hook — and a subplot involving a girl with facial scarring has always struck me as somewhat superfluous. In the end, though, these are only minor quibbles about an unforgettable film. The imagery is incredible, indelible (Hori’s abstract office space alone would make this a movie worth watching), and the ideas and questions it raises linger in the mind long after it ends. It would make an excellent double feature with John Frankenheimer’s Seconds, released the same year.

In this, the third of Tati’s four Monsieur Hulot films, the hapless Hulot (played by the director himself) struggles through modern life in 1960s Paris. Over the course of roughly twenty-four hours, he goes to a job interview (or tries to, anyway), visits a home exposition and an old friend’s very up-to-date and very exposed apartment, and attends the premature, chaotic opening of a new nightclub. Naturally, he can’t help contributing to that chaos in typical Hulot fashion.

Much like the Teshigahara situation, I can never quite decide whether this or Mon Oncle is my favorite Tati; fortunately, Mon Oncle is from 1958 and therefore ineligible for this list, so I didn’t have to choose between them. Both films always leave me with a smile on my face and a feeling of joy, but unlike its predecessor, Playtime builds to that joy gradually — so gradually that the shift from the cold sterility of the opening to the warmth and humanity of the ending happens almost imperceptibly, and the film is all the more magical for it. Add to that the incredible attention to detail evident in every frame and the complicated choreography necessary to get the onscreen chaos just right, and you understand why it took Tati some three years to shoot this movie. There’s so much going on that I still notice new things every time I watch it.

This post is part of the 6 from the ’60s Blogathon, hosted by the Classic Film & TV Café. Click the banner at the top to see all of the other great posts.

27 thoughts on “Six Favorites from the Sixties”