As I mentioned in the first post in this series, I didn’t really delve into Ozu’s silents until I had seen the vast majority of his sound films, despite the fact that I Was Born, But… was actually the first of his movies that I watched. I suspect that this is the case for a lot of Ozu fans; titles like Late Spring, Early Summer, Tokyo Story and Floating Weeds are far better known than, say, Walk Cheerfully or That Night’s Wife. In fact, much of his pre-World War II work, silent and sound alike, remains relatively obscure. Nick Wrigley summarized this divide in the May 2003 issue of Senses of Cinema:

Ozu’s career falls loosely into two halves, divided by the Second World War. His breezier early works are unafraid to acknowledge the influence of Hollywood melodramas or to flirt with farce. Such films contrast greatly with his later masterpieces, which portray a uniquely contemplative style so rigorously simplistic that it renounces almost all known film grammar.

In other words, if you expect a “typical” Ozu film — a film in his distinctive style — his early work might come as a surprise. Personally, I prefer his post-war period, but I’ve found a great deal to enjoy in his silents and early sound films. By starting at the beginning of his filmography (or rather, his existing filmography) and going through it in order, I hope to see step-by-step how that Ozu style came to be. 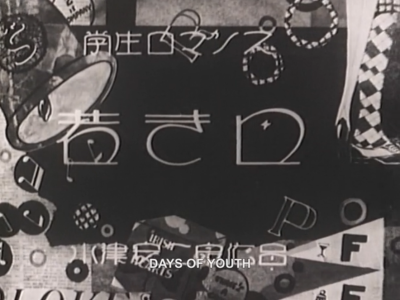 Ozu’s earliest surviving film is Days of Youth, released in April of 1929, when he was just twenty-five years old. It was, in fact, his eighth film as a director, but its predecessors are now considered lost. (You can read about them here. A total of seventeen Ozu films are no longer extant, all from 1936 or earlier, and several others exist only in part.)

The film opens with a few shaky panning shots(!) around northwestern Tokyo,  after which we see a sign on a house: “Room Upstairs for Rent.” When a would-be renter stops by, he finds university student Bin Watanabe (Ichirô Yûki) already ensconced there. Watanabe takes down the sign, tears it up and explains that he just moved in, but as soon as the other man leaves, he posts another hand-painted copy of the same sign. A young woman named Chieko (Junko Matsui) then comes to inquire, and Watanabe’s plan starts to become clear. He says he’s moving out that evening, so she can move in tomorrow.

Afterwards, Chieko meets up with another student, Shuichi Yamamoto (Tatsuo Saitô), for whom she’s promised to knit a pair of socks. It’s clear that Yamamoto’s interest in Chieko isn’t limited to hosiery, but his attempts to impress her hit a snag after he accidentally puts his hand in wet paint. I couldn’t help thinking of Harold Lloyd during this sequence. Undoubtedly the glasses put the idea in my mind, but I could imagine Lloyd doing the same routine with very similar facial expressions. 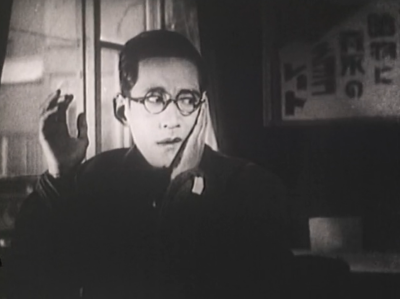 The next day, Chieko goes to her new apartment to move in, only to find that Watanabe is still there. (“Yesterday wasn’t a good day,” he explains.) He soon packs up and departs but leaves behind a painting so that he can go back for it later and have another excuse to see Chieko. Yes, it’s essentially the same transparent ruse that George Costanza tried to use sixty-odd years later. Co…stanza. Watanabe, unable to find a new apartment of his own, goes to stay with Yamamoto, who happens to be a friend from school (though he’s less than pleased with having Watanabe as a roommate). Though they’re concerned about their upcoming exams — Yamamoto more so than Watanabe — they’re far more interested in the ski trip that will follow the exams, especially when they learn that Chieko will be skiing in the same area.

It’s impossible for me to go into this with completely fresh eyes, but if I had watched it without knowing that it was an Ozu film and without any experience with his silents, I don’t think I would have guessed that he had directed it. His trademark static camerawork is absent. Maybe it would be more accurate to say that dynamic camerawork is present; at any rate, the camera moves quite a bit, especially during the skiing scenes that dominate the second half of the movie. Most notably, when Yamamoto falls (he does a lot of that), the camera shows his perspective and tumbles to the ground with him. In one striking shot, the lens is covered with snow after a fall, just like the lenses of his glasses.

Many critics and scholars have commented upon the fact that frequently Ozu, instead of transitioning directly from the end of the opening credits to the first scene, or from one scene to another, interposes a shot or multiple shots—as many as six—of an object, or a group of objects, or a room, or a landscape, often (but not always) devoid of human figures. These units of film have been variously called “curtain shots,” “intermediate spaces,” “empty shots” or, most frequently, “pillow shots” (by analogy with the “pillow words” of classic Japanese verse).

The nature and function of these shots are disputed. Sato (citing the critic Keinosuke Nanbu) compares the shots to the use of the curtain in the Western theatre, that “both present the environment of the next sequence and stimulate the viewer’s anticipation.” Richie claims that they are a means of presenting only what the characters themselves perceive or think about, to enable us to “experience only what the characters are experiencing.” Bordwell sees it as an expansion of the traditional transitional devices of the “placing shot” and the “cutaway,” using these to convey “a loose notion of contiguity.”

There are scenic images in Days of Youth that resemble later pillow shots — of smokestacks, in particular — but they either play a part in the story or serve as traditional establishing shots. I also noticed a lot of uncharacteristic close-ups on hands and feet.

Thematically, Days of Youth also differs from Ozu’s more famous films in that it focuses on friendship rather than family relationships. Even when the balance tipped in favor of family, however, friendship remained an important part of Ozu’s work. Watching Yamamoto and Watanabe with their classmates, I was struck by something: these are the young versions of the middle-aged men found in later Ozu films like Equinox Flower, Late Autumn and An Autumn Afternoon. These movies all feature groups of male friends, probably in their fifties, who have known each other since their school days. They often get together to drink or play golf, and when they’re not discussing their daughters’ marriage prospects (or someone else’s daughter’s marriage prospects), they’re reminiscing about their time at middle school or university. Again, I’m sure it was the glasses, but I imagined Yamamoto growing up to be played by Nobuo Nakamura (a constant presence in these groups of friends), and maybe Watanabe would be played by Shin Saburi. I could see the trio in Late Autumn reflecting on their ski trip misadventures, with Setsuko Hara’s character in the Chieko role.

(Speaking of frequent Ozu actors, Chishû Ryû plays one of the students on the ski trip. Let’s just say we’ll be seeing a lot of him.)

Ozu’s light touch allows him to include some harsh truths and potentially heavy themes in Days of Youth without dragging down the comedy. There’s a youthful resilience to the characters that’s neatly symbolized in the ending. Without giving too much away, I’ll say that it brings the film full circle; in fact, it concludes with several panning shots that appear to be the opening panning shots in reverse!

Days of Youth may not be typical Ozu, but it’s a fun comedy from a much more experimental phase of his career, an early step toward the later masterpieces.