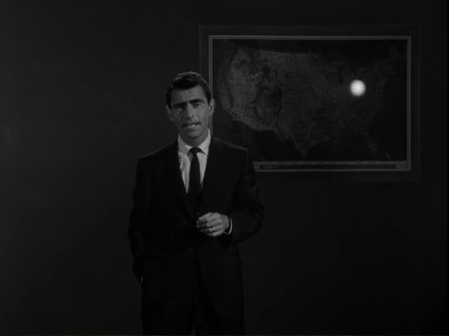 “Tonight’s story on The Twilight Zone is somewhat unique and calls for a different kind of introduction. This, as you may recognize, is a map of the United States, and there’s a little town there called Peaksville. On a given morning not too long ago, the rest of the world disappeared, and Peaksville was left all alone. Its inhabitants were never sure whether the world was destroyed and only Peaksville left untouched or whether the village had somehow been taken away. They were, on the other hand, sure of one thing: the cause. A monster had arrived in the village. Just by using his mind, he took away the automobiles, the electricity, the machines, because they displeased him, and he moved an entire community back into the dark ages — just by using his mind.

“Now I’d like to introduce you to some of the people in Peaksville, Ohio. This is Mr. Fremont. It’s in his farmhouse that the monster resides. This is Mrs. Fremont. And this is Aunt Amy, who probably had more control over the monster in the beginning than almost anyone. But one day she forgot. She began to sing aloud. Now, the monster doesn’t like singing, so his mind snapped at her and turned her into the smiling, vacant thing you’re looking at now. She sings no more. And you’ll note that the people in Peaksville, Ohio have to smile. They have to think happy thoughts and say happy things, because once displeased, the monster can wish them into a cornfield or change them into a grotesque walking horror. This particular monster can read minds, you see. He knows every thought. He can feel every emotion. Oh yes, I did forget something, didn’t I? I forgot to introduce you to the monster. This is the monster. His name is Anthony Fremont. He’s six years old, with a cute little boy face and blue, guileless eyes. But when those eyes look at you, you’d better start thinking happy thoughts, because the mind behind them is absolutely in charge. This is The Twilight Zone.” 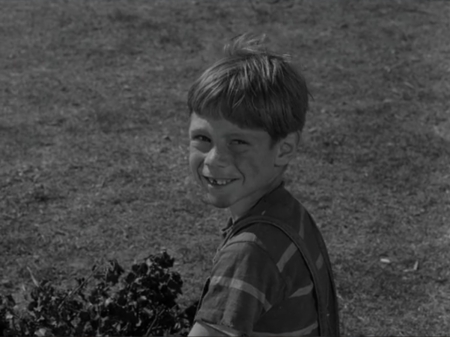 Choosing a single favorite Twilight Zone episode, much less a favorite television episode in general, is a near impossible task. I could have written about “Living Doll,” “Nightmare at 20,000 Feet” or any number of others that I love, but at last, I settled on a standout from the third season: “It’s a Good Life,” based on a short story of the same title by Jerome Bixby, adapted by Rod Serling and directed by James Sheldon.

As Serling says in his lengthy introduction, the story is somewhat unique. (Spoilers, or non-spoilers, ahead.) Unlike most Twilight Zone episodes, it has no twist at the end. The people of Peaksville don’t turn out to be Anthony’s toys, nor is he the pawn of an even more powerful infant, nor are there any other surprises that viewers accustomed to the series might anticipate. In essence, it’s more of a premise than a plot, but it’s an intriguing one, and the episode builds such an atmosphere of unease and suspense that it never seems stretched too thin.

Virtually every adult around Anthony (Bill Mumy) exists in a state of constant terror, including — and especially — his parents (Cloris Leachman, John Larch). The sole exception is Aunt Amy (Alice Frost); despite being turned into a “smiling, vacant thing” by her nephew, she occasionally makes gentle attempts at criticism, which are always silenced before they can evoke Anthony’s wrath. “It’s a terrible hot day,” she remarks to Bill (Tom Hatcher), who’s delivering the family’s groceries. “Oh, I wouldn’t say that, Aunt Amy,” he replies hastily. “No sir, I wouldn’t say that at all. It’s fine. It’s just fine. It’s a real good day.” He addresses the end of this declaration to Anthony through an overly emphatic grin; Anthony, appeased, grins back.

Unlike Aunt Amy, the other adults are all raw nerves, sweaty foreheads, forced cheeriness and lavish praise for Anthony and everything that he does. Even when he isn’t within earshot, they’re too afraid of his mind-reading powers to risk saying what they really think. At one point, his mother tells Bill about an animal that he invented the day before: “It had real sharp teeth. It tried to bite him. I was kinda hopin’ that…” She can’t finish her sentence, and merely gives Bill a guilty look. “I gotta get goin’, Ms. Fremont,” he says, too afraid to stay and risk sharing in her bad thoughts. It’s not clear exactly how long the villagers have been living under Anthony’s control, though his father mentions an incident from the previous year when the boy turned pigs into monsters, and the grocery store hasn’t been able to obtain bar soap for over a year; what is clear is that it’s only a matter of time until one of them snaps. 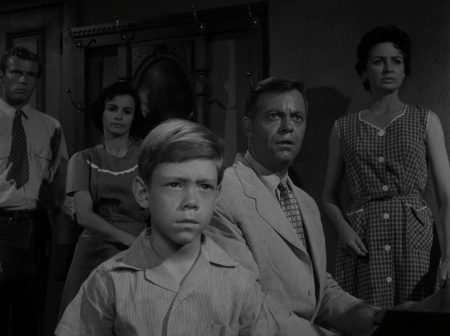 As Anthony, Mumy gives a natural, believable performance, which adds to the character’s psychological realism. In his self-centeredness, he’s not much different from any other child, especially one who’s always been allowed to do exactly as his pleases. No one dares to correct him (save for Aunt Amy, now rendered ineffectual), so he’s never learned to put other people’s feelings and needs before his own. “I hate anybody that doesn’t like me,” he declares. Notably, in Jerome Bixby’s short story, Anthony is only three years old; the six-year-old Anthony of this adaptation has had no reason to move past that stage of emotional development. When he complains that other children don’t come over to play with him, he’s almost sympathetic, yet the reason why they avoid him is obvious even before his father points out that Anthony banished his last playmates to the cornfield. “It’s just that if you wish people away like that, there won’t be no one left,” he says with an anxious chuckle.

One of the most frightening things about this episode is the idea that the people of Peaksville have no way out of their situation. As it goes on, a feeling of impending doom becomes almost palpable. Not only are the villagers at the mercy of an impulsive, egocentric, supernatural child who doles out punishments based on his own definitions of good and bad, but they’re cut off from the rest of the world, which may not exist anymore, for all they know. There’s nowhere to turn for help, their supplies are running low (including the alcohol that one neighbor uses to cope) and even if they were to do away with Anthony, their future would not be promising, isolated as they are.

It’s not difficult to read this story as a political allegory, with Anthony as a despot and the cornfield as a gulag, a concentration camp, or what have you, and Serling’s “no comment” closing narration certainly suggests a real world parallel. That said, its unexplained mysteries are a great part of its appeal. When and how did Anthony obtain his powers? What happens in the cornfield? Can he bring people back? Can he use his abilities for good instead of evil? He is shown to be creative as well as destructive, somehow broadcasting dinosaur battles on television (which everyone is forced to watch) and inventing new animals. An average child might draw a three-headed gopher on a piece of paper; Anthony creates a living, breathing one, but only for a short time. “I’ll make him dead now,” he says. “I’m tired of playing with him.” It’s all a game — or it would be, if he didn’t hold life, death and, quite possibly, the entire world’s fate in his hands. 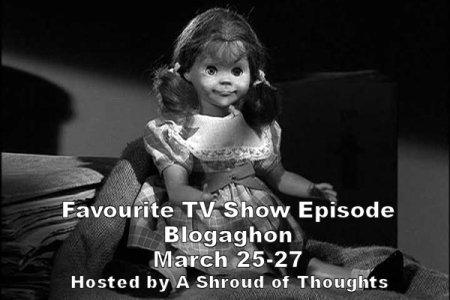 This post is part of the Favourite TV Show Episode Blogathon, hosted by A Shroud of Thoughts. Click the banner above to see all of the other great posts.