Following a thirty-year career at the Ministry of Public Works, Umberto Domenico Ferrari (Carlo Battisti) has only his modest pension as a source of income in his retirement. By his calculations, a twenty percent increase would be enough to set him on an even keel, but as it stands, he owes his landlady (Lina Gennari) fifteen thousand lire; if he doesn’t pay her in full by the end of the month, she’s going to evict him from the room where he’s lived for the past two decades. While these circumstances make Umberto a sympathetic figure, they also bring out the prickly side of his personality. In the introduction to his Miracle in Milan screenplay, director Vittorio De Sica described the title character of his 1952 film Umberto D. thusly:

Umberto is an old man and as such has all the defects of the old. It would have been easy to make him a sentimental, conventional, pathetic old man in order to make him more acceptable and pleasing. But no. Umberto is an old ‘bourgeois,’ whose former life we do not know. (He may be a widower or an old bachelor.) His past does not matter to us. What matters is Umberto today, in his seventies, alone near the close of his life, with all the burden of bitterness and of past struggles that have made him an irritable old man, almost unpleasant. In his behavior he is neither pathetic nor sentimental. He is good only to the good, and extremely disagreeable to those who are not good to him.

In fact, just one creature receives unconditional love and kindness from Umberto: his dog, Flike.

To quote Umberto, Flike is “a mutt with intelligent eyes, white with brown spots,” and he’s the greatest source of happiness — in all likelihood, the only source of happiness — in his owner’s life. Most of the time, Umberto is either angry or despondent, but when he’s with Flike, he exhibits tenderness, pride and childlike joy, and the contrast is so dramatic that he hardly seems like the same person. Even if Flike weren’t “impossible to hate,” as Umberto insists, the old man’s fierce attachment to his dog would be easy to understand. Umberto is extremely isolated. “I have no one, no son or brother, to help me out,” he tells a fellow pensioner. Although he runs into acquaintances from his past on occasion, the only people with whom he appears to have regular contact are his landlady and her young maid, Maria (Maria Pia Casilio). 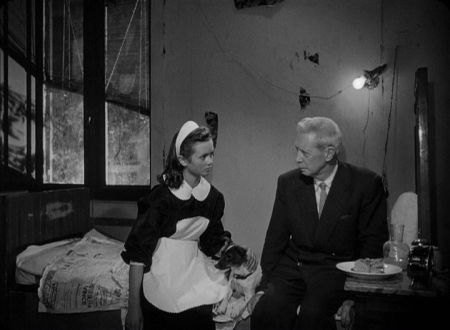 According to Umberto, his relationship with his landlady used to be at least cordial: “During the war she called me Grandpa. I gave her some meat from time to time.” Since then, however, it’s deteriorated into an out-and-out battle, a duel to the death between two strong, stubborn personalities. When Umberto claims that she “went crazy” after the war, it’s impossible to think he’s not a bit biased. For all the audience knows, the landlady has had a terrible time with him and is perfectly justified in kicking him out; that said, her methods certainly seem less than ethical. Upon returning home from a brief stay at the hospital, Umberto finds workmen stripping his wallpaper; later that evening, the wall itself has been knocked through so that the landlady can have a big formal living room once he’s gone; and even before the situation reaches that stage, she rents his room to adulterous couples whenever he leaves the house. “She charges a thousand lire an hour for the room, you know,” Maria tells Umberto. “A thousand lire every time.”

Despite their significant age gap — probably five or six decades — Maria is Umberto’s closest human friend. She’s in as tight a spot as he is: pregnant by one of her two boyfriends, she’s not sure which is the father, and neither young man has any interest in taking responsibility anyway; she is sure, though, that the landlady will fire her once she finds out, and if she leaves Rome and returns to her hometown, she’ll face a beating from her father. Still, maybe because of her youth, or maybe a kind of pragmatism, she lacks Umberto’s bitterness. She does what she can to help him, whether that means examining his throat when he feels sick, bringing him a piece of cake, or just showing some interest in him. Umberto reciprocates, encouraging her to study (“Everyone takes advantage of the ignorant”) and trying to help sort out the dilemma with her boyfriends. In one scene, someone inquires whether she’s Umberto’s daughter, and he actually looks disappointed when she denies it. However, even Maria becomes the target of his anger when she allows Flike to run away while Umberto is in the hospital with a fever. “Where were you, you fool?” he asks her. 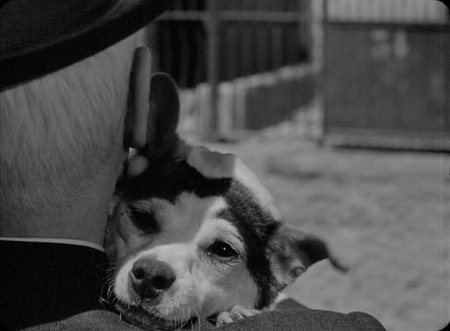 It’s at this point in the film that Umberto’s love for Flike, to the exclusion of the rest of the world, takes center stage. En route to the pound, he urges his cab driver to speed up. “What if I run someone over?” the driver asks. “I’ll pay the damages. Just hurry,” says Umberto, to whom money and human lives suddenly mean nothing. All that matters is rescuing Flike before it’s too late. Even if Flike would have a few days’ respite before being put to sleep, the noisy, confining, miserable pound is no place for him, or for any dog.

A few scenes earlier, while Umberto was in the hospital, he had discussed the landlady with a visiting Maria. “I’m paying my back rent, so she can’t kick me out. She can’t evict me. I’m not going to the shelter,” he said, his voice and gestures desperate. Pride and hardheadedness may prompt him to keep fighting back against his landlady, but fear seems to be his main motivator. He can’t afford a room elsewhere and has no relatives to turn to, so the shelter is his only option. While Umberto never goes into detail about the shelter, it’s obviously something that he wishes to avoid at all costs. Could it be, in his mind, akin to the pound, a crowded, dehumanizing place haunted by death? Yet the more desperate and hopeless Umberto’s life becomes, the more Flike matters to him, until the dog’s welfare comes to mean everything and his own means nothing. He may be grouchy, combative, even abrasive — “a good-for-nothing old man,” as he describes himself — but as his relationship with his dog demonstrates, he still has love to share; the tragedy is that his circumstances and his own personality give him precious few opportunities to do so.

This post is part of The Animals in Film Blogathon, hosted by In the Good Old Days of Classic Hollywood. Click the banner above to see all of the other great posts.