In 1949, Scottish-born Canadian filmmaker Norman McLaren traveled to China in order to work on UNESCO’s Healthy Village Project. There, he taught local artists how to create a variety of audio-visual materials that could be used to educate the rural population; he also witnessed the end of the Chinese Civil War. “About three months after I went out there, communists took over our particular town, and for the rest of the year I was living under the new regime,” he said in an interview included in the documentary Creative Process: Norman McLaren. “And I was able to see what it was doing and talk with many people and heard the story of their lives, particularly people between the ages of twenty and thirty. I tended to identify myself with what was going on there because I thought what was happening was very good. So then when I left China, the Korean War broke out the same day, almost, as I left China, and I came back to North America, and I felt a great tension about war in general. The tension that was produced from my year’s experience in China, plus my return to here, and to an environment where the newspapers were saying something totally different from what I’d been used to — that tension produced the film Neighbours.”

McLaren’s 1952 short Neighbours, made for the National Film Board of Canada, starts out as a 1950s suburban idyll: Two men (Grant Munro, Jean-Paul Ladouceur) sit on lawn chairs in their adjoining yards, contentedly reading their newspapers and smoking their pipes. Although they keep to themselves for the most part, they appear to be on good terms; after one man lights his own pipe, he’s quick to offer the matchbook to his neighbor, who accepts it with a smile. Suddenly, a single yellow flower springs up on the dividing line between their property. The men’s surprise and confusion turns to rapture as soon as they get a whiff of it, but it’s not long before their mutual joy gives way to possessiveness. They begin shoving each other away from the flower, each one insisting that it’s entirely in his own yard and therefore belongs to him. A fence (of white pickets, naturally) goes up, then down, then up again, its posts becoming makeshift swords for a duel, and from there the men descend into an all-out bruising and bloody brawl with catastrophic results.

While the story itself is simple (by necessity, considering that the film is only eight minutes long), the execution is rather complex. McLaren was primarily known for his work in animation, and Neighbours, though not an animated film in the traditional sense, reflects this. According to his friend and collaborator Donald McWilliams,

McLaren had been very intrigued by French trick films from the early 1900s in which everyday objects were animated frame by frame. He did some experimenting in his student films, and later he animated a household of furniture in a film for the General Post Office in London. He then wondered about the possibility of animating people frame by frame. This curiosity culminated in the extraordinary parable Neighbours, in which two men behave like cartoon characters in a tale both funny and ferocious. McLaren called the technique pixillation. The term is now universally misspelt as pixilation, which has an entirely different dictionary definition. McLaren made the term up from the word ‘pix,’ an abbreviation for picture.

Through the magic of pixillation — stop-motion animation using human beings, basically — the two men can make fences appear and disappear with the wave of a hand, perform figure skating moves on the grass and even fly, and those are far from the only cartoonish elements. The houses that sit in the background, for example, are blatantly nothing more than flat facades, like scenery from an elementary school play. Then there’s the unusual electronic soundtrack, the result of McLaren’s painting directly on the film; deprived of dialogue, the actors must use pantomime to express themselves, often of a highly exaggerated variety. The flower gets to express itself as well, dancing around and, when the men become violent, cowering in fear.

Indeed, for all of its childlike playfulness, Neighbours doesn’t hold back when it comes to showing the disastrous consequences of the men’s feud. (One particularly shocking section was cut from the official print for years, not restored until 1967.) The fact that the film is essentially a live action cartoon makes the violence all the more jarring and, at the same time, highlights the utter absurdity of the situation. Simplistic though it may be as a commentary on war, its message is one of universal relevance: Love your neighbor. 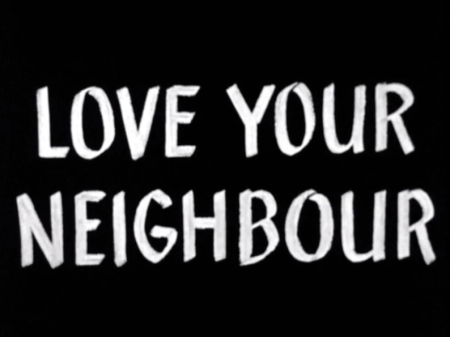 Neighbours can be viewed for free on the National Film Board of Canada’s website.

This post is part of the O Canada! Blogathon, hosted by Speakeasy and Silver Screenings. Click the banner above to see all of the other great posts.