Outside a theater in an English seaside town, an artist’s rendering of a grotesque face, massive in scale and positioned over the words “Archie Rice: The One and Only,” grins down at passersby. Scarcely anybody gives it even a moment’s glance, but one young woman, Jean (Joan Plowright), stops in the middle of the crowded sidewalk to gaze up at it. The expression on her face suggests a certain fondness for this strange figure, with perhaps the slightest touch of ambivalence. This ambivalence grows as she looks at the other promotional materials on display depicting the one and only Archie (Laurence Olivier) — no less grotesque in photographs than in drawings — posed with scantily-clad showgirls and proclaiming him “T.V. & Radio’s Sauciest Comic,” until she’s become downright glum. Obviously, Archie Rice is a public figure, but in private life he happens to be Jean’s father — and yet, different though they are in many ways, it’s not always easy to tell precisely where the public figure ends and the private man begins.

In this, the opening scene of the 1960 film The Entertainer, Jean has just arrived in her hometown, where she intends to visit her family for a few days and clear her head, or at least take a short break from the challenges and conundrums of her life in London. She’s been teaching art classes at what appears to be a youth center, and although she admits that “maybe the first term has been hell,” she insists that the work is important to her. Her fiance, Graham (Daniel Massey), can’t see any point in it, can’t even see any point in staying in England. He’s been offered a job in Africa, where his firm is expanding, and he intends to accept it; what’s more, he wants Jean to marry him next month and come along. “There’s nothing to keep us here,” he says to her. “You never stop telling me that everything about this country is dead. Well, I agree: it’s dead. This will be a wonderful chance for us to get out of it.” She remains unconvinced in spite of his efforts to persuade her, and their future together is in serious jeopardy.

Going home to her family isn’t exactly a vacation, though, even if they do live at the beach. Times are tough there — Jean’s stepmother, Phoebe (Brenda de Banzie), notes that the town’s movie theater is in danger of closing and says that “everything is doing badly” — and the Rices are no exception to the general trend. In addition to Phoebe, the household includes Archie’s father, Billy (Roger Livesey, only eleven months older than Olivier in real life), and Jean’s brother Frank (Alan Bates); another brother, Mick (Albert Finney), is in the military and has just been flown out to take part in the Suez Crisis.

And then there’s Archie himself. Although his advertising suggests that he’s a prominent and highly regarded star of mass media, that’s far from the truth. (“I haven’t seen him on the TV. Have you?” a young girl asks her mother as they walk by the theater, adding that Archie “looks daft.” Her father, following behind, scoffs, “He’s never been on TV.”) In reality, he’s a music hall performer, with the occasional outside gig like emceeing a bathing beauty contest. Considering that the film takes place in 1956, his profession makes him something of an anachronism. He’s followed in his now-retired father’s footsteps, though Billy not only appears to have been more successful than Archie in his heyday but also remains a beloved figure to many, whereas Archie tends to inspire irritation or contempt. (“Where did they dig him up?” asks one of the judges at the beauty contest.) No doubt nostalgia plays a major role in the public’s enduring fondness for Billy; his fans tend to be older people, naturally enough, and he reminds them of the proverbial good old days, now long past. Still, the fact that Archie sings, dances and tells jokes for ever-dwindling, not particularly enthusiastic audiences may not be entirely the result of changing times and tastes. It may also be because he’s not very good.

Archie’s stage persona is a jovial, campy, incessantly pattering creature in a hat, white gloves and oversized suit, with greasepaint eyebrows and a mouth and eyelashes exaggerated by makeup. Everything is a joke, a desperate plea for laughs. (“Does he think he’s funny?” one girl in the audience whispers to another. The second can only shrug.) When the show is over, he goes back to his dressing room, removes the makeup, washes away the shoe polish or whatever he uses to darken the gray hair on his temples — becomes a human being again, essentially. In his quieter moments, when he’s alone or talking seriously to Jean, the stage persona drops away, and the alteration is remarkable.

Such moments are rare, however. Again and again, he seems to be playing Archie Rice the character in his everyday life. It may be his default mode when interacting with people, a crutch to fall back on, but it sometimes comes across as calculated and self-serving. In one scene, for instance, after rattling off jokes to a small crowd in a pub, he steps aside with one of his listeners, a theater manager (Geoffrey Toone), and futilely tries to convince him to book the new show that he’s planning. Archie is determined to stage this show despite being unable to afford to keep the current one running, despite being unable to pay his fellow performers, despite being an undischarged bankrupt. He seems to have convinced himself that this one will be a success — or, at the very least, a means of extending his career — and he’ll do whatever it takes to secure the funding. 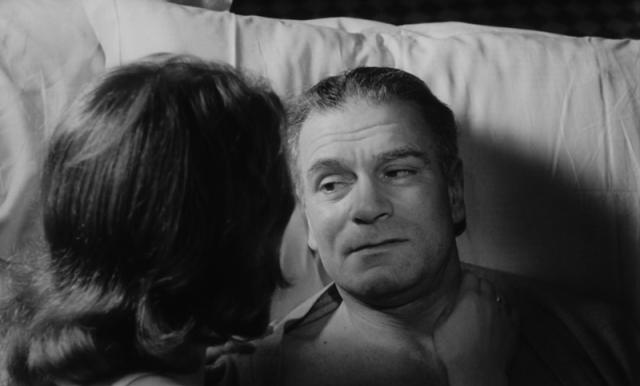 An opportunity arises when he meets Tina Lapford (Shirley Anne Field), a young woman of twenty who places second in the bathing beauty contest and happens to come from a wealthy family. She also happens to have show business aspirations, and both she and her ambitious mother (Thora Hird) see Archie as Tina’s ticket to stardom. If he gives her a part in his new show, her parents will put up money to make the show a reality. Although Archie goes so far as to talk of leaving Phoebe to marry Tina, their relationship is, above all, a cold-hearted business transaction, and they both know it. When the two end up in bed together (as they very quickly do), Tina flatters the much older Archie shamelessly, without making the slightest effort to be subtle or believable. “Oh, Archie, you make me feel so good. You do, really. There’s something — I don’t know, marvelous about you,” she tells him, and she says that she’s “never been as happy as this. Have you?” He replies that he doesn’t think he has, yet his expression belies his words. Instead of looking happy, he looks like a man who’s just been through a harrowing experience, scarcely able to muster a smile in the face of her fawning. He looks, to use a phrase that he’ll employ to describe himself later on, dead behind the eyes.

The phrase comes up when Archie and Jean are standing onstage in a theater during off hours, looking out at rows and rows of empty seats. In one of his fleeting moments of honesty and openness, he tells his daughter how he really feels about his job and the audiences who come to watch him: “You think I’m just a tatty old music hall actor. But you know, when you’re up here — when you’re up here, you think you love all those people around you out there. But you don’t. You don’t love them, like… Oh, if you learn it properly you’ll get yourself a technique. And smile, darn you, smile, and look the friendliest, jolliest thing in the world. But you’ll be just as dead and used up — just like everybody else. See this face? This face can split open with warmth and humanity. It can sing, tell the worst, unfunniest stories in the world to a great mob of dead, drab erks — and it doesn’t matter. It doesn’t matter. It doesn’t matter because — look. Look at my eyes. I’m dead behind these eyes. I’m dead. Just like the whole damn shoddy lot out there.”

Archie, then, isn’t the only one in crisis. His speech evokes Graham’s earlier statement, quoting Jean, that “everything about this country is dead.” Perhaps she’s not so sure; at any rate, she doesn’t seem ready to give up on it just yet. Unlike her crusty, conservative grandfather, who frequently complains about modern life and the state of the nation, Jean doesn’t long for an idealized past when the sun never set on the British Empire. “If it weren’t for your sort of people, still hanging on to their livings in other people’s countries, my brother wouldn’t be going off to fight,” she tells Graham. She does what little she can to help create a better future, not only by teaching art to teenagers but also by attending a peace rally in Trafalgar Square. Still, others her age — Graham, for one — see no future for themselves in England and are looking abroad for better opportunities. Phoebe, though not so young, hopes to start a new life by emigrating as well: her niece in Canada has invited the Rice family to manage a hotel in Ottawa. She’s all for it; Archie is opposed. When Jean asks Frank how he feels about the idea, he expresses his willingness to go: “Take a look around you. Can you think of any good reason for staying in this cozy little corner of Europe? Who are you? You’re nobody. You’re nobody, you have no money, and you’re young. And when you end up, it’s pretty certain you’ll still have no money, you’ll still be nobody, and the only difference is you’ll be old.”

That would appear to be the future looming before Archie. He’s still middle-aged, but the world has left him and his style of performing behind, long before he’s ready or able to settle into retirement. (The film’s casting underlines this generational shift. Both Alan Bates and Albert Finney, just starting their screen careers, would become significant figures in the emerging British New Wave, as would director Tony Richardson; Olivier, playing their father, represents the old school, though certainly Archie is no great Shakespearean.) While he may seem borderline delusional, that’s not quite the case. Jean laments the fact that her father won’t face up to reality, but Frank replies, “I don’t think he ever faces up to much else. He knows music hall’s dying better than you do.” Basically, he’s aware of the reality of his situation, but he refuses to accept it. 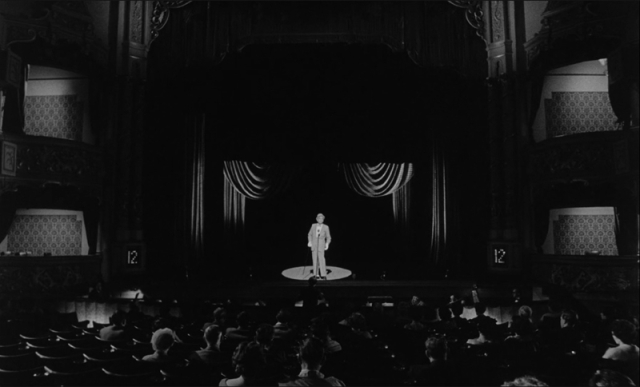 One of Archie’s songs, which also plays during the film’s opening credits, is entitled “Why Should I Care?” and sounds like a personal credo:

Maybe, above anything else, the reason he so often plays Stage Archie in his personal life is because it’s a kind of coping mechanism. Stage Archie doesn’t care; Stage Archie isn’t overwhelmed by crises, from bankruptcy to a failing marriage to his son being taken prisoner in a war; Stage Archie, carried over into the real world, can drown out Phoebe’s constant (though understandable) fretting or cheer up the family. It’s only a temporary fix, but he’ll cling to it, cling to it desperately. The show must go on until it absolutely can’t go on anymore. 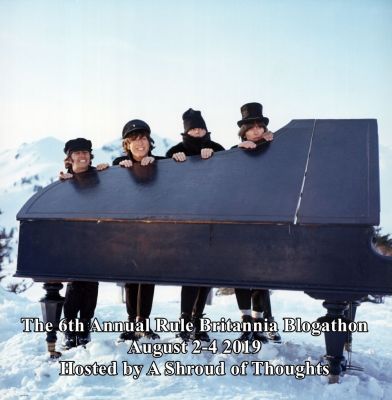 The post is part of The 6th Annual Rule, Britannia Blogathon, hosted by A Shroud of Thoughts. Click the banner above to see all of the other great posts.