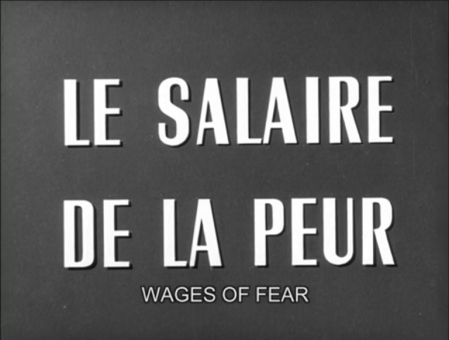 When a huge fire breaks out at an American oil company in an isolated region of South America, boss Bill O’Brien (William Tubbs) decides that the best solution is to blow it out like a candle, using a nitroglycerin-induced explosion to do so. The nitroglycerin will need to be transported to the site of the fire by truck over rough roads, and O’Brien knows that no union will ever allow its members to take on such a dangerous job. He decides, instead, to hire some of the unemployed and underemployed foreigners living in the squalid nearby village, men longing to get away but too poor to afford it. Four of them end up driving the two trucks: Mario (Yves Montand) and Jo (Charles Vanel) in one, Luigi (Folco Lulli) and Bimba (Peter van Eyck) in the other. It’s a journey of some three hundred miles, and not a single inch is free from peril.

I must admit that I had a hard time getting into The Wages of Fear. Rather than going for suspense and excitement from the start, Henri-Georges Clouzot’s 1953 film takes its time in establishing its characters and its setting — a fine approach in theory, but I didn’t find this opening section particularly compelling, though I’m sure it would be more meaningful on a second viewing. (It did, however, bring to mind The Treasure of the Sierra Madre; the two films might make an interesting double bill.) The first thing that really caught my attention was a scene in which a woman native to the area decries foreigners like O’Brien who come in, exploit and even kill the locals, and simply pay off their families. Her diatribe’s main purpose is to introduce the fire; while I would have liked to hear more from her perspective, I suppose that would have led to a very different story.

At any rate, it was at this point that the film started to engage me, and once the men are on the road, it certainly lives up to its reputation as a thriller. As one might expect, they encounter numerous obstacles in the course of their journey, but even when nothing out of the ordinary is happening, there’s always the possibility that an unnoticed rock or stick in the road could jolt a truck and vaporize its passengers in an instant. Human frailty, too, puts them at risk. Danger and desperation makes some men bold or even reckless; others are overpowered by fear. Between the differences in their personalities and the tension inherent in the situation, clashes are inevitable, yet they must work together if they want to succeed — or just survive.

The Wages of Fear was remade by director William Friedkin in 1977 under the title Sorcerer, which I would enjoy seeing at some point now that I’ve seen the original. Oddly enough, my first exposure to the story — or the basic premise, anyway — was through a 1976 episode of Little House on the Prairie called “The Long Road Home.” In it, Charles and Mr. Edwards fail to earn enough money from their crops (as per usual), so they take a job hauling nitroglycerin by wagon. You never know where you’ll find references to classic films, and although this one was rough going at first, I’m glad that I stuck with it.

This post is part of the 2016 Blind Spot Series, hosted by The Matinee. My full list can be found here.