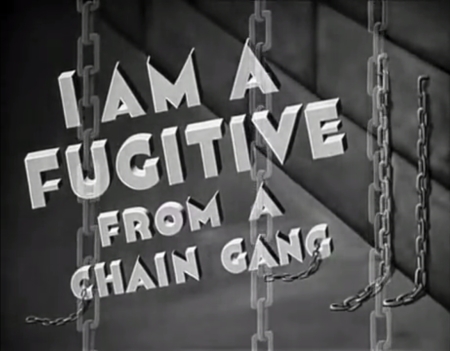 Following his discharge from the army, World War I veteran James Allen (Paul Muni) is eager to put his newfound interest in engineering to use, but his family (Louise Carter, Hale Hamilton) and his old boss, Mr. Parker (Reginald Barlow), have other ideas. They expect him to return to Mr. Parker’s factory, becoming “a soldier of peace instead of a solider of war” — the last thing he wants. “All the while I was hoping to come home and start a new life, to be free, and again I find myself under orders, a drab routine, cramped, mechanical, even worse than the army.” Eventually, with his mother’s blessing, he sets off to find work in construction, which proves to be far more difficult than he could have imagined. Although he wanders all over the eastern half of the United States, jobs are either short-lived or nonexistent, and Jim’s situation becomes so desperate that he tries to pawn his war medal. “Come here, mister,” the owner of the pawn shop says, leading him to a display case. “Look.” Inside is a box full of medals much like his; clearly, he isn’t the only veteran in dire straits.

One night, he ends up at a flophouse, where he meets a man named Pete (Preston Foster). Pete suggests that they try to beg a couple of hamburgers at the local lunch wagon, a proposition to which Jim readily agrees, but once they get there, Pete pulls out a gun and forces Jim to empty the cash register. While the robbery is still in progress, the police arrive. Pete is killed in the ensuing shoot-out, and though Jim tries to flee the scene, he gets arrested. Because the money was found on his person and because he attempted to escape, he receives a particularly harsh sentence: ten years of hard labor on a chain gang.

“I’ve been through hell,” Jim had told his mother and brother while discussing his wartime experiences, and he finds himself back there when he becomes part of the chain gang. Brutal and dehumanizing, full of backbreaking labor, frequent beatings and inedible food, the real goal of this system seems to be destroying convicts rather than reforming them. Some are broken, like a man who faints while working and submits to that evening’s whipping without the slightest resistance; others remain rebellious, at least in spirit, dreaming of the day when they can spit in the warden’s face. Jim, arrested for a crime that he was forced into at gunpoint, seems woefully out of place. After joking about the murders committed by their fellow inmates, one of the other prisoners asks him why he ended up there. “For looking at a hamburger,” he answers bitterly.

One man, at least, is set free upon finishing his sentence; while he walks out, another prisoner leaves in a coffin. Watching them go, a man remarks, “Well, there’s just two ways to get out of here: work out or die out.” Escape, it seems, is too dangerous to risk, yet it has happened in the past. Life on the chain gang is so unbearable to Jim that he’s willing to take that risk, but as he soon finds out, breaking free is much harder than the physical act of running away.

I Am a Fugitive from a Chain Gang, directed by Mervyn LeRoy, may be the quintessential example of the gritty social realism for which Warner Brothers became known in the thirties. It was, in fact, based upon the true story of Robert Elliot Burns, who wrote about his experiences in I Am a Fugitive from a Georgia Chain Gang!, published in 1932. The cinematic version followed later that year, but if it was rushed into production in order to capitalize on the book’s success, it doesn’t show in any significant way. (While I might quibble that the female characters are rather thin, I don’t know that a more leisurely production schedule would have resolved that.) I Am a Fugitive from a Chain Gang is an immensely powerful film with a stellar central performance from Muni. It exposes a cruel, corrupt system and, on a more universal scale, demonstrates that hard work and good intentions are no guarantees against injustice and misfortune. Although it’s set mainly in the twenties, Jim’s financial struggles, if not his legal problems, must have resonated with a large portion of the Depression-era audience, not to mention other World War I veterans who found themselves at loose ends upon returning home and even worse off once the Depression hit. 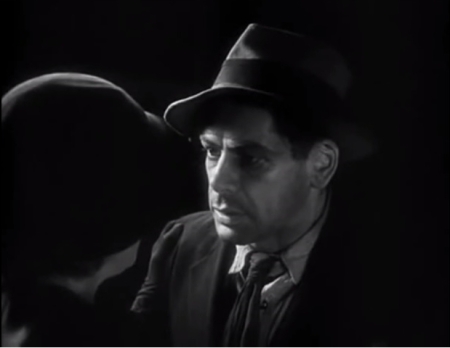 As might be expected in a story of this sort, there are quite a few scenes of intense drama — one of my favorites was Jim hiding underwater for an agonizingly long time with his pursuers only a few feet away — but the moments that really struck me were smaller, subtler, more understated. When Jim is loaded onto a truck for his first day of hard labor, for example, he sees a team of mules being chained in the same manner as the men, and then notices that the black prisoners are kept separate from the white ones. The idea that racial segregation must still be upheld in a world where men and mules are equals is patently absurd, and the subsequent alternating shots of black prisoners and white prisoners imply that there’s no difference between them but their skin color. (One strongly suspects, though, that the black prisoners receive even less humane treatment than their white counterparts.) Another marvelous touch is the way the freed man walks out as if he’s still wearing his leg chains, with the guards jeering that he’ll soon be back; whether or not he ever gets arrested again, his experiences are sure to remain with him for the rest of his life. On a lighter note, I was amused to see Jim buying his long-awaited hamburger shortly after his escape. Perhaps it was a futile attempt to pick up where he left off and erase the horrible period in between.

Lighthearted moments are all but nonexistent in I Am a Fugitive from a Chain Gang. (Admittedly, I did have to laugh when Jim used “Allen James” as an alias, though I doubt that that was supposed to be funny.) Bitter irony abounds, however. After escaping, Jim finally gets a construction job, just as he always wanted — and finds himself swinging a pickax, almost as if he’s still on the chain gang. Throughout the movie, beginning even before his arrest, there’s a sense that he can never be free. Something always restrains him, whether it’s the army, pressure from his family, economic hardships, literal chains or the fear that the police and his past might catch up with him at any time. The closing line may be one of the bitterest ironies of all. I won’t spoil it; I’ll only say that if you haven’t seen I Am a Fugitive from a Chain Gang yet, it’s a blind spot well worth fixing.

This post is part of the 2016 Blind Spot Series, hosted by The Matinee. My full list can be found here.